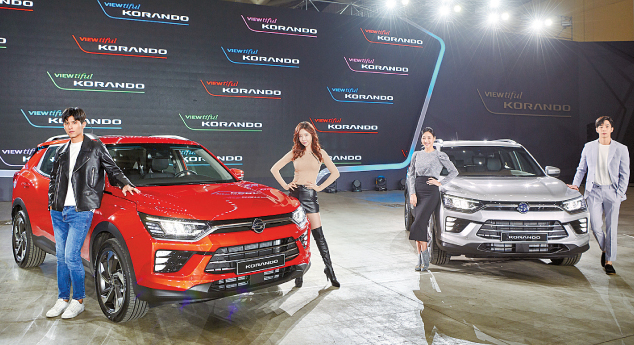 Models promote SsangYong Motor’s Korando SUV during its launch ceremony at a convention center in Incheon on Tuesday. [SSANGYONG MOTOR]

Export targets for the vehicle have not been released.

It is the first new Korando in eight years, replacing the Korando C SUV released in 2011 that hasn’t seen much success.

As the small Tivoli and large G4 Rexton have been leaders in their respective SUV segments, the SsangYong is hoping its new Korando will boost sales of midsize SUVs.

The car comes with a competitive price tag. The cheapest version of the Korando costs 22.16 million won ($19,820), slightly less than the Hyundai Tucson SUV, which starts at 23.5 million won.

The company said it is betting big on the new model, which has been developed under the project name C300. During the last four years of development, the company invested roughly 350 billion won, according to a company spokesperson.

The model comes with a 1.6-liter diesel engine offering a maximum output of 136 horsepower and a roomy 551-liter trunk, larger than the Tucson and Kia Sportage, its two rivals in the segment.

SsangYong said that the vehicle is equipped with the highest level of partial auto-driving features in the segment, dubbed intelligent adaptive cruise control. It said the car is able to drive on its own not only on highways, but also on local roads.

“We believe the Korando will be a key model that helps our company bolster business performances and be recognized as a premium SUV maker,” said SsangYong CEO Choi Johng-sik during a launch event held Tuesday in Songdo, Incheon.

While the popularity of the Tivoli and Rexton made the company Korea’s third-largest automaker by sales last year - for the first time in 15 years - the company hopes to strengthen its grip on that position.

Choi added that the company plans to develop electric and connected cars to make them the company’s future growth engine. Currently, the Korando comes only in diesel trims.

Korando SUVs were first released in 1983. The name comes from the phrase “Korean can do.”