Kim, Trump set to kick off 2nd summit in Hanoi

Kim, Trump set to kick off 2nd summit in Hanoi 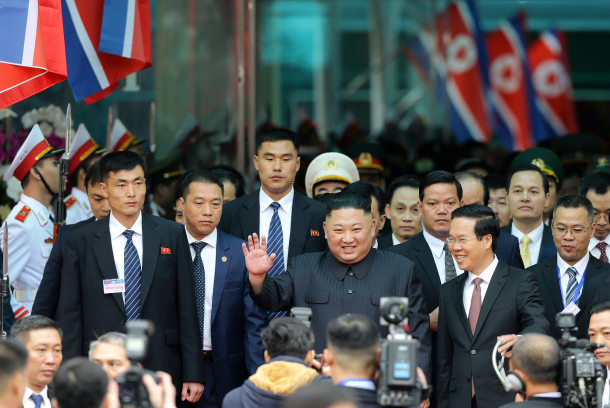 North Korean leader Kim Jong-un waves after arriving by train at Dong Dang Station in Vietnam on Tuesday ahead of his second summit with U.S. President Donald Trump, which is scheduled for today and tomorrow in Hanoi. [AP/YONHAP]

North Korean leader Kim Jong-un and U.S. President Donald Trump will reunite after eight months to kick off their high-stakes, two-day summit today in Hanoi after they both arrived in the Vietnamese capital yesterday.

Kim’s armored train, which departed from Pyongyang on Saturday, traveled around 4,500 kilometers (2,796 miles) over 65 hours and arrived at Dong Dang Station in Vietnam’s northern Lang Son Province around 8:20 a.m. Tuesday.

A red carpet was rolled out from the train to the station, and Kim was greeted by Vietnamese officials and an honor guard with North Korean and Vietnamese flags flying.

Kim smiled at the crowd at the station as he was presented with flowers after he arrived with his entourage from Pyongyang. He quickly switched over to his armored Mercedes-Benz S600 Pullman Guard luxury limousine to complete the last stretch of his trip to Hanoi by car. Kim rolled down the window of his vehicle and waved again as he departed the station around 8:30 a.m. accompanied by a motorcade. A dozen guards in black suits who always accompany Kim in his travels outside of his country surrounded the vehicle at the station.

Vietnamese authorities banned traffic on the 170-kilometer stretch of highway linking Dong Dang with Hanoi between 6 a.m. and 2 p.m.

The North Korean leader’s motorcade arrived around two and a half hours later at the Melia Hanoi hotel, where Kim will be staying, at around 11 a.m. Pedestrians stood by the sidewalk to watch the motorcade pass by, while foreign and local press were also on standby to capture Kim’s arrival. Kim spent the next several hours settling down in the hotel.

Kim’s motorcade departed from the hotel around 5 p.m. and entered the nearby North Korean Embassy. He left an hour later back to the hotel.

A flight from Pyongyang to Hanoi would only have taken around five hours, but the train trip parallels that of his grandfather and North Korean founder Kim Il Sung’s visit to Vietnam in 1958 and 1964, which fostered a long friendship with Vietnamese Communist revolutionary Ho Chi Minh. This marks the first time in 55 years that a North Korean leader has visited Vietnam. Kim flew in an Air China Boeing 747 plane borrowed from Beijing for the Singapore summit last June.

Kim Jong-un’s trip doubles as an official visit to Vietnam, but his schedule this week has not been made public. He was expected to meet with Vietnamese leaders and visit tourist and industrial sites during his stay, which could last until Saturday.

Some have also speculated that Kim may visit the Samsung Electronics smartphone factory in Bac Ninh Province during his visit to Vietnam after North Korean officials visited the area last week. Samsung, the largest foreign investor in Vietnam, accounts for around a quarter of the country’s total export revenue. President Trump was set to arrive in Hanoi Tuesday night on Air Force One. He was expected to stay at the JW Marriott Hotel Hanoi.

As he departed from Washington on Monday, Trump tweeted: “Heading over to Vietnam for my meeting with Kim Jong Un. Looking forward to a very productive Summit!” He also tweeted earlier that North Korea would rapidly become an “economic powerhouse” with complete denuclearization, calling on Kim to “make a wise decision.”

His working-level team has been trying to hammer out an agenda and finalize last-minute details with North Korean officials up until the summit.

U.S. Secretary of State Mike Pompeo and White House Chief of Staff Mick Mulvaney will accompany Trump to the dinner with Kim. Kim will likely be accompanied by Kim Yong-chol, the vice chairman of the North’s ruling Workers’ Party’s Central Committee, who also oversees inter-Korean affairs, and his younger sister and closest aide, Kim Yo-jong.

One-on-one and expanded meetings between the leaders will also take place Thursday. The two sides are expected to hold a signing ceremony for a joint agreement. Trump, this time, will be under domestic pressure to produce a more concrete roadmap to complete denuclearization of North Korea than what was outlined in the June 12 joint statement, though the president has emphasized there is “no rush.”

The inspection of the Yongbyon facilities is considered by analysts as a minimum standard, and it remains to be seen what additional concessions Kim is willing to offer.

The United States, in turn, could offer a declaration to formally end the 1950-53 Korean War, which ended with an armistice agreement and not a peace treaty; the idea has been floated since the first summit. The opening of liaison offices in Pyongyang and Washington is another step toward providing security guarantees for North Korea.

Diplomatic sources have indicated that the two sides have been negotiating on including an end-of-war declaration in their joint statement, something that has been endorsed by Seoul. However, what North Korea really wants is for the United States to ease sanctions. Washington has been adamant that it may be difficult to ease the core economic sanctions on the North but has indicated possible flexibility in case-by-case scenarios.

This could include at least the resumption of tours of Mount Kumgang, which came to a halt in 2008 following the fatal shooting of a South Korean tourist by a North Korean guard. Kumgang tourism is seen as an inter-Korean project that can be resumed relatively easily compared to reopening another vestige of economic cooperation between the North and South, the shuttered Kaesong Industrial Complex.

Secretary of State Pompeo arrived at Noi Bai International Airport in Hanoi earlier Tuesday ahead of President Trump. Pompeo was scheduled to stay in Hanoi till Thursday and then travel to Manila, according to the U.S. State Department. John Bolton, the U.S. national security adviser and hard-liner on North Korea, also had arrived separately.

In an interview with CNN Sunday, Pompeo said Trump is focused on getting “a real step, a demonstrable, verifiable step,” during the summit.

But Pompeo acknowledged that Pyongyang still poses a nuclear threat and that the core UN Security Council sanctions on North Korea will be removed only after its "full, verified denuclearization."

He added, “If we get a substantial step and move forward we could certainly provide an outlet which would demonstrate our commitment to the process as well.”

This could include, Pompeo said, “real opportunities” to make the North’s economy “one that looks more like South Korea’s economy than the one that exists in North Korea today.”