A view of buildings in the posh Hannam-dong neighborhood in Yongsan District, central Seoul, Wednesday. Adjustments in the government-assessed values of 694 properties nationwide last month brought its assessment methods into question. [YONHAP]

Property valuation standards and the objectivity of assessments have been brought into question after the Land Ministry last month made numerous adjustments to initial determinations.

Of 220,000 standard house assessments released on Jan. 25, values were changed in nearly half the cases in which the preliminary assessments were disputed. Of the 1,599 disputes submitted, 694 claims were accepted and the assessed value was changed.

In some cases, the change was dramatic. 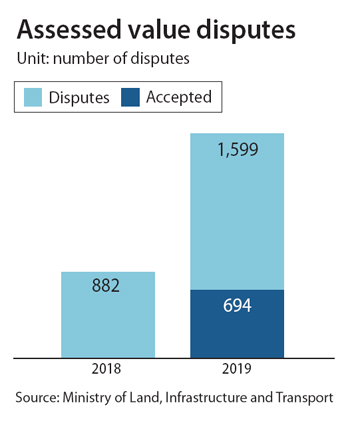 The structures covered in this round of assessments are used as a standard for nationwide assessments to be undertaken later in the year.

The wild swings in value have the market talking about “rubber band prices” and wondering about seemingly arbitrary standards.

According to the government’s online real estate information website, last year the assessed value of a two-story single-unit house in Seongdong District, eastern Seoul, was 1.43 billion won ($1.28 million). The assessment of a three-story multi-household property in the same area was exactly the same. For this year’s preliminary assessment, the figure jumped to 3.79 billion won for both. After the valuations were disputed, the value of the two-story house dropped to 2.73 billion won and the three-story house to 1.84 billion won.

A two-story house in Mapo District, western Seoul, assessed at 1.09 billion won last year, received a preliminary assessment in 2019 of 3.29 billion won. The figure fell after a dispute was lodged to 2.15 billion won.

The Korea Appraisal Board (KAB), a state-run organization for the assessments, explained that the changes were based on “qualitative judgments.”

The rise in assessed values this year is in part a reflection of the steep rises in property prices last year.

Some adjustments have fluctuated in billions of won, stirring concern on how assessments are actually made.

“It is a normal process that considers opinions every year and makes changes within rational bounds,” explained Han Jung-hee, the head of the Land Ministry’s Real Estate Valuation Division. “There were more disputes, but the adjustments should be seen as accounting for steep price rises.”

“It is not simply an addition or subtraction to the past year’s assessed values, but active adjustments through thorough inspection,” she said.

Single-unit houses aren’t as uniform structures as apartments, and total transaction numbers are low. It is also difficult for the government to make visits to each house to assess their value. Inaccuracies are inevitable given the relatively small sample size.

“In the case of single-unit houses, there are a lot of old houses and a huge price gap exists between those renovated and those not,” said Kwon Dae-jung, a real estate professor at Myongji University. “With the current method, if a renovated house is sold, its price influences nearby houses.”

“It is questionable whether accurate value assessments can be made by employees at the KAB, who are not professionals,” said Rho Tae-ug, president of the Korea Appraisal Society. “If assessed values continue to soar, controversy surrounding the assessment standards can only persist.”