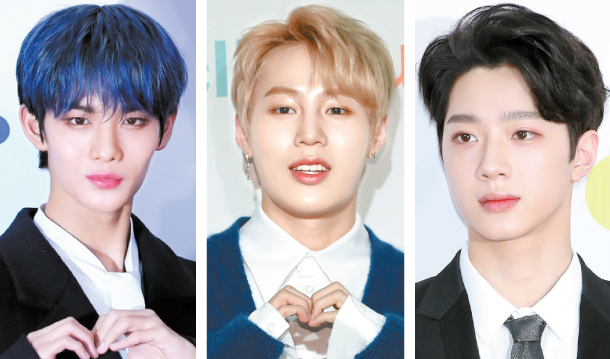 Project boy band Wanna One may have ended their run, but fans of the group need not despair, as news came on Wednesday that members, from left, Bae Jin-young, Ha Sung-woon and Lai Kuan-lin are each embarking on their own journeys.

C9 Entertainment announced that Bae will make his solo debut in the coming months and then join the boy band C9BOYZ (working name) in the latter half of the year.

The group will be the agency’s first boy band - the agency mostly represents solo artists, such as singer Younha, Juniel and rapper Cheetah.

Lai will release his first official track “9801” on March 11 as a part of the duo WooseokXKuanlin, according to Cube Entertainment.

The duo’s existence was reported earlier, but Wednesday’s statement finalized the title and the release date of the upcoming track.

Ha released his solo EP “My Moment” on Wednesday evening, and will meet with his fans on March 8 and 9 at the SK Handball Gymnasium, southern Seoul.

He is also scheduled to tour around Asia, beginning with a stop in Tokyo on March 17. He will then make his way to Taiwan, Thailand, Hong Kong and Macao.