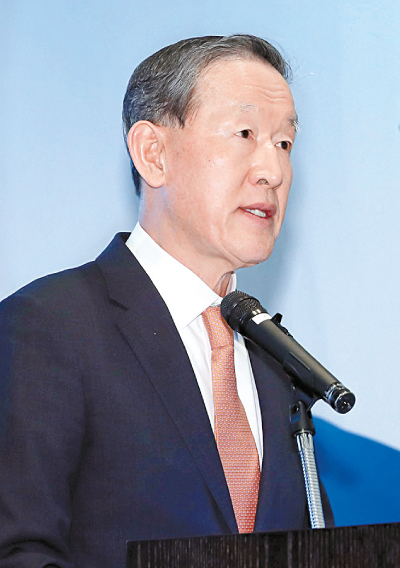 GS Group Chairman Huh Chang-soo was reappointed to chair the Federation of Korean Industries (FKI), one of the major business lobbying groups in Korea, on Wednesday.

Huh will serve a two-year term until 2021. It is his fifth term at the lobbying group after first taking office in 2011. If he completes his next term, he will become the longest-serving chairman alongside late Hyundai Group founder Chung Ju-yung, who headed the group for 10 years.

“FKI has put a lot of effort into reforms, but our efforts still fall short of public expectations,” Huh said during his inaugural speech Wednesday at FKI conference center in Yeouido, western Seoul. “As I once again take this role, I will do my best to make this organization live up to the expectations of our member companies and the public.”

Huh added that Korean industries are due to face a worse economic environment this year and introduced four major areas of the organization’s focus.

He said the group will tackle the country’s slow economic growth by pushing to lift regulations that harm the growth of innovative businesses and finding ways to let more women and young job seekers participate in economic activities.

Even before Huh’s official reappointment Wednesday, he was expected to be reappointed as the group struggles to find a fresh candidate.

The group’s standing faltered after it was swept up in the political scandal surrounding former President Park Geun-hye and her confidante Choi Soon-sil. There were revelations that the lobbying group pressured its member companies to donate to nonprofits run by Choi.