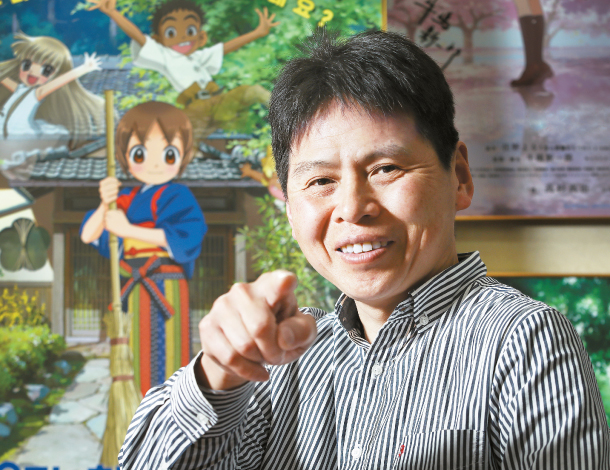 Kosaka Kitaro, above, director of the animated film “Okko’s Inn,” meets with the JoongAng Daily on Friday in Gangnam, southern Seoul, to talk about how he put his film together. [PARK SANG-MOON]

With hundreds of films produced each year in Japan, animation is a highly competitive field in the country. Since production companies all fight to hire high-profile, experienced animators, many film producers spend most of their time looking for talent. That’s also the reason why it took three full years to produce “Okko’s Inn.”

The film’s director, Kitaro Kosaka, says that although he was in charge of the overall direction of the movie, he himself had to draw a lot of the film. Fortunately, he was originally an animator who freelanced at the world-famous Studio Ghibli. He worked on hit films such as “Castle in the Sky” (1986) and “Princess Mononoke” (1997), and served as the animation director for “Spirited Away” (2001), “Howl’s Moving Castle” (2004) and “The Wind Rises” (2013).

Based on a Japanese children’s series titled “Waka Okami wa Shogakusei!” the film tells the story of a 12-year-old girl named Okko who, after losing her parents in a car accident, moves into her grandmother’s home in a ryokan (Japanese hot spring inn) village.

There, she meets a ghost boy named Uribo, who happens to be her grandmother’s old friend. Uribo convinces Okko to become the heir and eventual owner of the inn, and Okko receives training in hosting a variety of guests. The experience eventually heals the pain of her loss.

Ahead of the film’s local premiere on Wednesday, Kosaka paid a visit to Korea to discuss his experience directing the film with the Korea JoongAng Daily. The following are edited excerpts from the interview. 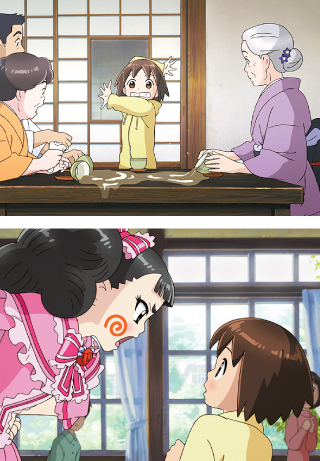 Okko, top, becomes the new caretaker of her grandmother’s inn in the film “Okko’s Inn.” Yet Okko’s rival, Matsuki, above left, doesn’t welcome her to the village. [TRIPLE PICTURES]

Q. You started your career as an animator and worked as an animation director for a long time. What led you to become a film director?

A. I’d never thought about becoming a director; I worked at Studio Ghibli for a long time as a freelancer and was also simultaneously working at the studio Madhouse. One day, I was offered to direct the TV [adaptation of] the “Okko’s Inn” comic book series.

[The reason I made it into a movie instead of a TV series,] was because the production - which was originally carried out by a friend - was going poorly. So my friend asked me to direct a film instead. I read the original comic so I knew it was going to be fun and I accepted the offer.

What’s the difference between the original comic series and the animated film?

The original series was meant for children, so they do not really touch on the topic of death, at least intentionally. But the series was published over 10 years ago, and the original fans of the series - who were mostly elementary school students at the time - are now in their mid-20s. I wanted them to also be able to enjoy the adaptation, so I concentrated on how Okko deals with the topic of death in the film.

Okko is a very interesting character. Please tell us more about her.

She is a shy and childish character. Since the film is about Okko’s personal development, I wanted to show how people around her influence her and help her grow. Usually, a person with a strong ego is not easily influenced by outside factors. Yet Okko is an elementary school student whose ego has not fully developed, so I concentrated on how outside factors - such as her friends, guests at the inn and the village - all affect her in a positive way.

I also wanted to show that working for others, and not being too self-conscious, actually fills you with good energy. Working in animation is very hard, and you always run out of time, but when I think that I am working for my audiences, I become more motivated.

You have mentioned that one of your favorite characters is Okko’s rival, Matsuki, who is her opposite. What is Matsuki’s role in the film?

Yes, she’s the absolute opposite of Okko. Okko comes from the city, is shy and is not as smart as Matsuki, but Matsuki is a smart girl who dresses up as a princess. She was born in a village and represents the village as a whole. In the beginning, Matsuki doesn’t accept Okko as a member of the village, but as time passes and the two get closer, they become friends; in the end, they dance together at the festival, symbolizing coexistence.

You must have studied a lot about children for the movie. How did you want to represent them?

I did observe a lot of children. Children are full of vigor and make a lot of movements, unlike adults. They talk out loud, and walk and jump around a lot. I carefully observed these movements and tried to convey what it means to be a child in the movie. That’s why the characters wander around so much during the film.

At a press conference held last week, you mentioned that although children were the target audience, the movie is for everyone. What should people expect when they watch the film?

Children do not have a lot of life experience, so I hope they simply enjoy watching [the characters] like Uribo and the plot itself. Adults can also enjoy the movie because it has deep messages with quite a lot of relatable elements.

Your film was invited to various international film festivals and was also praised by director Makoto Shinkai who was behind the hugely popular “Your Name.” How does that make you feel?

In the beginning, my target audience was the young fans of the original series of the film. But, unexpectedly, many people watched the film and praised it, so I’m very happy and surprised. I never knew it would reach this far. I hope many people enjoy the film and feel refreshed after watching it.