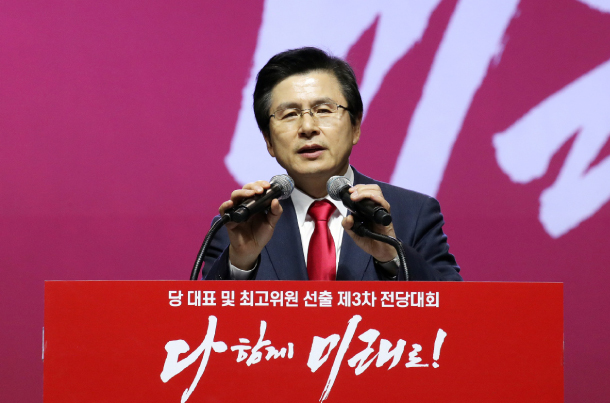 Hwang Kyo-ahn, former prime minister under the Park Geun-hye administration, delivers his acceptance speech after he was elected as the new chairman of the conservative opposition Liberty Korea Party on Wednesday. [YONHAP]

The LKP held a convention at the Kintex convention center in Goyang, Gyeonggi, and elected a new chairman and five members of the Supreme Council, ending a seven-month leadership vacuum. The new leadership will have a two-year tenure over the party and will be responsible for its campaign for next year’s general election. The LKP currently controls 113 seats in the 298-member National Assembly. Two more candidates ran for the chairman post. Former Seoul Mayor Oh Se-hoon came in second place and Rep. Kim Jin-tae was in third. Hwang received 68,713 votes, while Oh won 42,653 and Kim 25,924 votes.

The party used mobile and nationwide voting by party members and opinion surveys of the general public to determine the winner. At the convention, 8,100 delegates also cast ballots in the election. Party member and delegate voting counted for 70 percent and the opinion survey counted for 30 percent. It remains to be seen if Hwang’s leadership will help the LKP recuperate from political damage caused by Park’s ouster. Hwang, 61, is now tasked with reinventing the image of the conservative party and resolving internal factional strife ahead of the April 2020 general election.

After passing the bar exam in 1981, Hwang made a name for himself under the authoritarian Chun Doo Hwan regime as a prosecutor who fiercely cracked down on violations of the National Security Act. The anti-communist law was often arbitrarily used to suppress dissent. While serving as the minister of justice in the Park administration, Hwang personally led the charge against the Unified Progressive Party for anti-state conspiracy in 2014, winning a court decision to dismantle the far-left party. This instantly made Hwang a darling of the anti-communist right.

Park eventually named Hwang her prime minister the following year, and he ended up serving as acting president for three months in early 2017 following Park’s impeachment over a corruption and power abuse scandal.

Meanwhile, about 60 liberal activists were arrested by the police after holding a protest outside the convention venue in the afternoon to demand the LKP’s dismantlement. They said the party’s new leadership must punish three lawmakers for denigrating the 1980 Gwangju Democratization Movement at a recent public forum.