Following a recent ruling by the Supreme Court that the maximum working age of manual workers should be increased from the current 60 to 65, six city governments said Tuesday that they want to raise the age requirement for free senior citizen subway passes from 65 to 70. 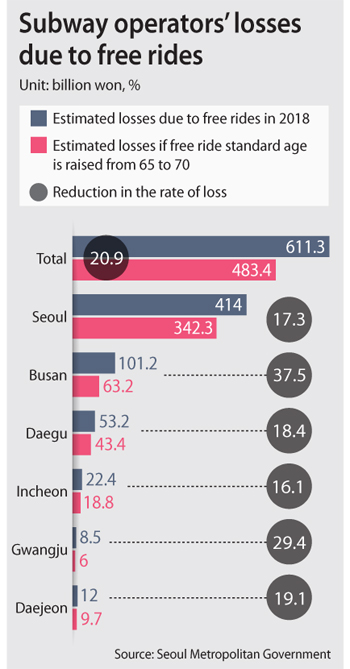 The Seoul, Busan, Daegu, Incheon, Gwangju and Daejeon Metropolitan Governments, which operate their cities’ subways, said the government and the National Assembly must come up with measures to make up for the revenue loss caused by offering free rides of the elderly.

Since 1984, senior citizens older than 65 have been using subways free of charge. The Welfare of Older Persons Act defines those 65 and older as elderly.

The city governments’ request is the first push for further change since the Supreme Court’s ruling last week. On Feb. 21, the court said a manual laborer should be seen as fit to work until 65 based on various changes to Korean society, increasing the standard for the first time in three decades.

“Soon, the new standard will be reflected to set a new retirement age,” said an official of the Seoul Metropolitan Government. “Therefore, we need to start a discussion on increasing the starting age of free subway rides.”

He indicated that the age should be raised from the current 65 to 70.

In the six major cities, including Seoul, an accumulated number of 443 million people used subways free of charge in 2017. They are 17.5 percent of the total subway riders.

While the local governments demand the central government cover the loss caused by these free rides, the Ministry of Economy and Finance refused to do so, stressing that subway operation is exclusively the job of local governments. The ministry only covered the loss for the sections of subway that are operated by Korail. In 2016, the government paid 121 billion won.

The Seoul and Busan city governments said that they want to replace aging railways and train cars that were introduced three decades ago, but that they were unable to come up with the financial resources to do so.

According to the Seoul city government, the combined losses to the six cities will be reduced from 611.3 billion won to 483.4 billion won, or 20.9 percent based on 2018 data, if the senior citizen age standard is increased to 70.

The city governments’ demand will likely affect other welfare programs that are linked to the working age, such as the basic pension for the elderly, national pension and long-term care insurance.

“By 2026, Korea will become a superaging society, where 20 percent of the population is elderly,” Health and Welfare Minister Park Neung-hoo recently said. “We need to start a discussion to gradually increase the age standard of a senior citizen from 65 to 70.”

“Based on the precondition that the right to mobility for the elderly is guaranteed as much as possible, we can consider increasing the standard age,” said Yang Jae-jin, a public administration professor at Yonsei University. “The program should be revised in a way that full fares are collected from the elderly during the morning and evening commuting hours.”