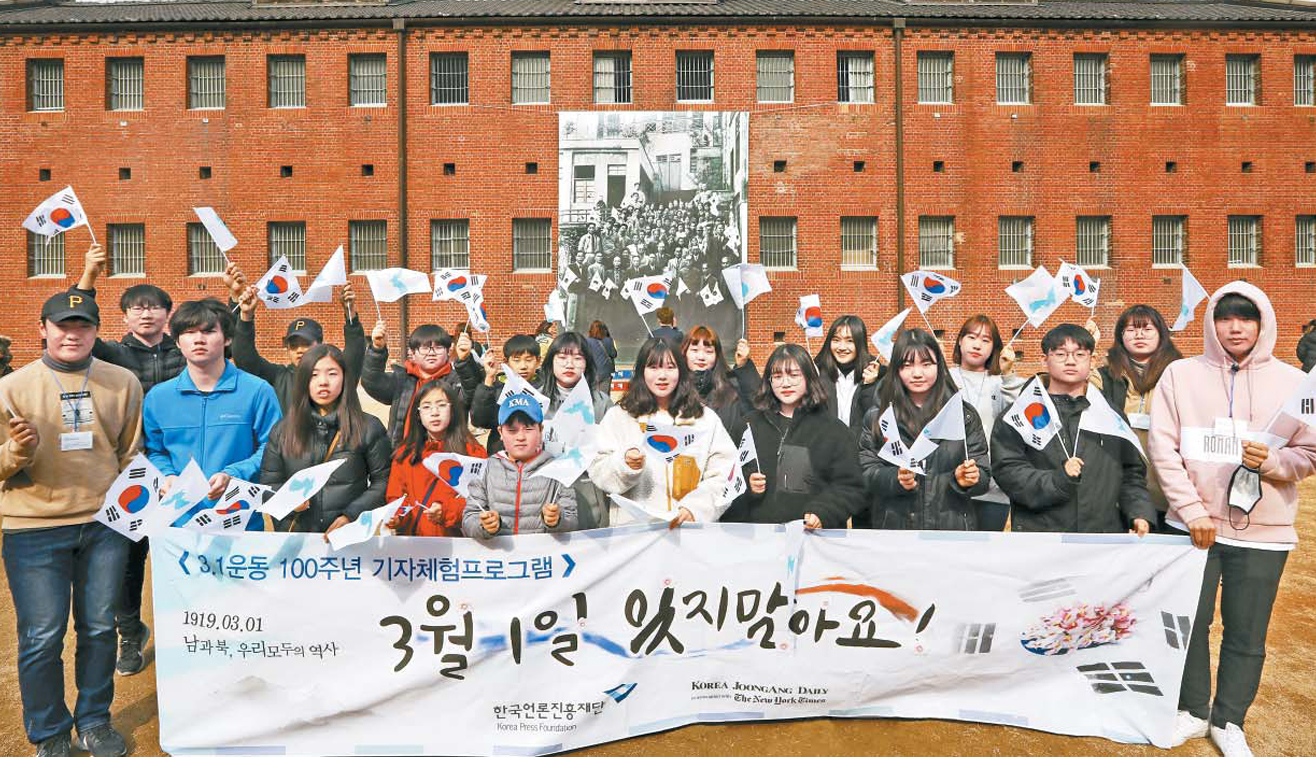 A group of middle and high school students celebrate the centennial of the March 1 Independence Movement on Wednesday at the Seodaemun Prison History Hall in western Seoul. They were part of a two-day journalism program that was organized by the Korea JoongAng Daily, hosted by the Korea Press Foundation and sponsored by the Korea Military Academy to mark the national holiday, which falls tomorrow. [PARK SANG-MOON]

Nothing stunned 19-year-old Lee more than her history class at Yeomyung School. She was taken aback with the long list of kings that ruled Korea centuries ago. Back in North Korea, she was never taught about Korean history before the birth of the North’s leader Kim Il Sung in 1912.

Lee, who wished to reveal only her surname for this article due to fear of endangering relatives back home, defected from Ryanggang Province, in the northern part of North Korea that borders China, in January 2016. She escaped to China and then to Thailand before taking a plane that brought her to South Korea two months later. Lee now attends an alternative school for North Korean defectors in Jung District, central Seoul.

Lee was among 26 students who participated in a special two-day journalism program that wrapped up on Wednesday. She toured historic sites related to Korea’s independence movement against Japanese colonial rule and learned about the media. The program was hosted by the Korea Press Foundation, organized by the Korea JoongAng Daily and sponsored by the Korea Military Academy to mark the centennial of the March 1st Independence Movement, which falls tomorrow.

On Tuesday, the group visited the Korea Military Academy in Nowon District, northern Seoul, to look around an exhibition highlighting Korea’s independence forces. Later that day, they went to the Independence Hall of Korea in Cheonan, South Chungcheong. In the evening, they traveled to the Special Warfare Command in Icheon, Gyeonggi, where they spent the night discussing in groups the differences between the March 1st Independence Movement in South and North Korea.

After a night at the Command, they visited the Seodaemun Prison History Hall in Seodaemun District, western Seoul, on Wednesday morning, where Korean independence and pro-democracy activists were jailed and martyred. They spent the afternoon learning how to write news articles and make newspaper layouts at the Korea JoongAng Daily in Jung District.

Lee, the North Korean defector, said everything was new to her when she visited the Korea Military Academy on Tuesday morning and heard explanations from a curator about the Korean independence movement.

“I’m really bad at history and I don’t know a lot of names,” said Lee, “but I think when I later hear the same names that I heard today, I can go, ‘Oh! I’ve heard of that person!’”

Kim, 17, who also attends Yeomyung School, said she was shocked to hear that Koreans her age fought for Korea’s independence in the past. Kim was born in Yanbian in China’s northeastern Jilin Province, which borders the North, after her mother defected from North Korea and was sold to a Chinese man. Kim flew to South Korea in 2015. Her mother, who arrived in the South about nine years earlier, got divorced from Kim’s biological father, remarried a South Korean man and gave birth to Kim’s sister.

If she had the chance, Kim said Tuesday she would have liked to ask other South Korean students participating in the journalism program what they thought about reunification, which she strongly supports.

Kim Sa-rang, 15, from Majang Middle School in Icheon, said she felt gratitude to the older generation.

“It’s really sad,” she said with a frown. “I normally don’t think about our independence activists, but coming here and hearing [about their efforts], it’s so moving.”