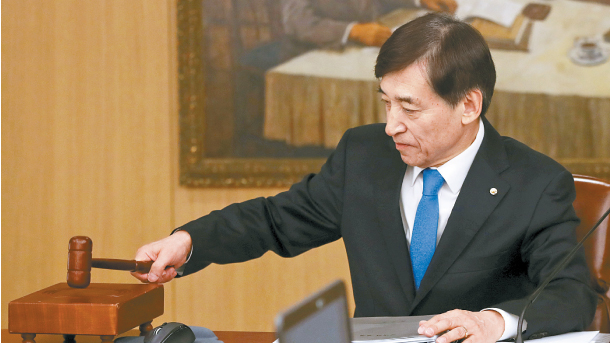 The country’s central bank kept its benchmark interest rate unchanged on Thursday as it opted to stay on the sidelines amid mixed economic signals and dynamic external situations such as the U.S.?North Korea summit and a trade dispute between the world’s two biggest economies.

The decision, made unanimously among the Bank of Korea (BOK)’s policymakers, was in line with market expectations.

Gov. Lee Ju-yeol cited external uncertainties as the factors affecting the decision to hold the key rate at 1.75 percent.

“[The BOK’s monetary policy committee] decided to freeze the interest rate by factoring in uncertainties linked with the U.S. Fed’s pace of interest rate hikes, a trade row between the United States and China and Brexit,” Lee said. 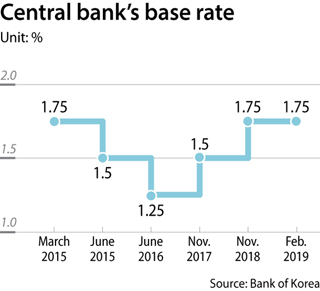 He added that it also remains to be seen whether the slowing pace of household debt increases will continue or be short-lived.

The country’s outstanding household credit that covers household loans and credit card spending stood at 1,534.6 trillion won ($1.36 billion) in the fourth quarter, according to the central bank last week.

The latest figure saw an increase of 20.7 trillion won from three months earlier, but quarterly growth was still the lowest since 2008. When counting on-year gains, the figure is the smallest increase since the second quarter of 2014.

In assessing the state of the Korean economy, the chief said that the country’s economy has grown at a pace that didn’t veer from the potential growth rate of 2.8-2.9 percent.

“The economic state is not far from the potential growth rate and will likely achieve expansion in line with the [BOK’s] projection last month.”

Back in January, the central bank cut its projection for the growth of gross domestic product by 0.1 percentage points from 2.7 percent to 2.6 percent. It estimated 2020’s growth at 2.6 percent.

The downward revision was affected by the different headwinds outside of Korea, a slowdown in exports, weaker-than-expected earnings from Korea’s major corporate players and a deteriorating jobs situation.

The downturn in exports and earnings from the final quarter led some analysts to forecast that the BOK could consider lowering the interest rate.

The governor, however, brushed off the idea.

“The current state of monetary policy can be considered as accommodative, so we are not at a stage to discuss a rate cut,” Lee said, echoing his stance last month.

As for inflation, Lee said that there will be less inflation pressure due to the government’s welfare policies and lower oil prices.