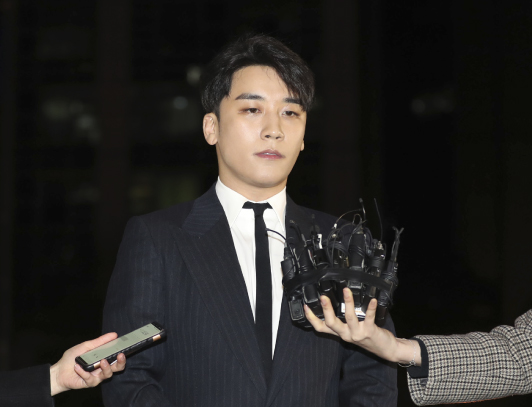 Prepared for questioning - Seungri, a member of popular boy band Big Bang, appears before the Seoul Metropolitan Police Agency on Feb. 27 to face questioning on suspicions that he circulated narcotics and attempted to buy sexual services for potential foreign investors. He left the police agency building after eight hours and 30 minutes of questioning. [YONHAP]

Seungri, member of popular boy band Big Bang, appeared before police on Wednesday to face questioning on suspicions that he circulated narcotics and attempted to buy sexual services for potential foreign investors.

“I apologize for causing trouble,” he told reporters as he arrived at the Seoul Metropolitan Police Agency, central Seoul, around 9:00 p.m. “I will faithfully respond to the investigation.”

A digital news outlet reported earlier that the 29-year-old singer attempted to buy sexual services for foreign investors in an investment company he was preparing to establish with an acquaintance in December 2015.

Seungri’s management agency, YG Entertainment, said he will request a urine test, as well as tests for other drug.

YG expressed hopes that the truth about the “imprudent rumors” will be unveiled through a thorough police investigation.

The singer will have to be punished if the suspicions are found to be true, but, if not, those who raised the suspicions will face criminal and civil charges, the agency warned.

The newspaper said Seungri co-founded the company Yuri Holdings in early 2016 for investment in restaurant and entertainment businesses.

The newspaper unveiled conversations he allegedly had with the company’s head and with one of its employees at that time. The messages showed Seungri directing the employee to prepare seats and “loose women” for the investors at a large nightclub in Seoul’s posh Gangnam area.

YG immediately denied the report as “false,” claiming it to be based on fabricated text messages.

The Seoul Metropolitan Police Agency said its investigators have already begun an internal probe into the suspicion.

The police agency has been separately probing Burning Sun, another nightclub in Gangnam where Seungri was a public relations director, over allegations of narcotics use, sexual assaults, violence and corrupt ties with district police.

Meanwhile, YG Entertainment announced on Thursday afternoon that Seungri has canceled three of his concerts, which were originally scheduled to take place in Osaka, Japan, and Jakarta, Indonesia.

“Seungri will cancel not just the concerts but all planned schedules, and will thoroughly cooperate with all investigations,” said the agency.