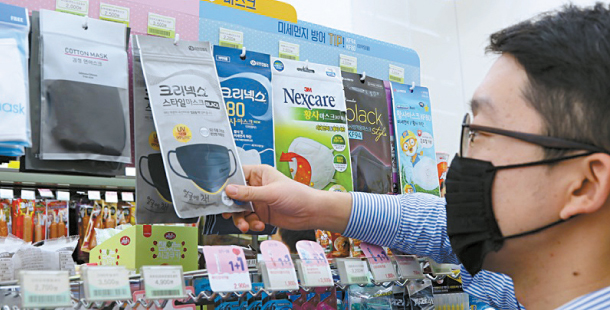 A customer grabs a face mask at a convenience store. Due to growing concerns about fine dust, mask sales have skyrocketed. [BGF Retail]

At least one market is booming in Korea - the face mask market.

Items usually popular during the winter are not selling particularly well, especially as the weather has been warmer than usual. According to CU, the largest convenience store chain in the country, demand for warm drinks is up only slightly, while the sale of other winter products has, in some cases, dropped.

From Dec. 1 to Feb. 25, the sale of hot coffee was up 9.3 percent. Paper-cup drink sales dropped 5.1 percent, while the chain reported a drop of 4.8 percent in hot pack sales. Hot packs are a recent favorite, with sales doubling last season.

According to the Korea Meteorological Administration, the weather in Korea has been warmer than usual this winter. Following a brief cold snap in early January, the temperature generally stayed 2 degrees Celsius (3.6 degrees Fahrenheit) higher than winter averages.

But face masks, worn to filter fine dust, have helped make up for the slower sales of other items.

Fine dust reached record levels this winter. On Jan. 14, the reading hit the highest levels since the data were first compiled in 2015. Readings have remained high since then and started to spike again at the end of February.

As a result of the dangerous pollution, CU’s mask sales jumped by 22.6 percent year on year. Sales were particularly good from Jan. 11 to 14, when fine-dust levels peaked. The total mask sales during that period were six times higher than the total the previous week.

Mask sales have been particularly impressive at CU in recent years, with a clear trend evident as the pollution problem has become more severe and as people have become more aware of the health problems associated with high levels of pollution.

Reports from other convenience store chains show a similar level of demand. Hot pack sales at GS25 over the past three months were up by 2.1 percent, but the total sales of masks jumped by 33.4 percent year on year.

CU is planning to open “CU fine dust safe zones” in its stores nationwide in March.

In an effort to meet the rising demand, the chain is expanding its mask lineup by 50 percent. The franchise is also adding a fine-dust level reading to the weather information provided to stores to help them efficiently place orders for pollution protection items.

“We are considering what we can do amid the growing severity of fine-dust problems that are starting to threaten consumer health,” said Choi Yu-jeong, a merchandiser at BGF Retail, which owns CU. “We will keep up with bringing new ways to efficiently establish a sales strategy and strengthen product selection based on big data analysis.”