Has Choi Ji-man finally found a ballpark to call home?

Has Choi Ji-man finally found a ballpark to call home? 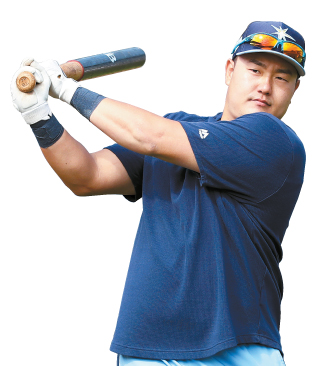 And the 27-year-old may finally have found a place he can call home.

Choi signed with the Seattle Mariners out of high school in 2009, but it wasn’t until 2016 that he made his Major League Baseball (MLB) debut - with a different club, at that.

For the first time in his career, Choi has come to spring training with at least some semblance of certainty and clarity about his future.

“This year’s camp feels different than the previous ones,” Choi said Monday at the Rays’ spring training site at Charlotte Sports Park in Port Charlotte, Florida. “I used to get all wound up and nervous during spring training. Now, I am more relaxed, and I am just focusing on what I have to do on the field.”

Choi said his manager, Kevin Cash, told him about how he was going to be used this season. That has given Choi some peace of mind, allowing him to avoid getting caught up with spring training numbers and feel more comfortable tinkering with his hitting mechanics.

“Spring training games are an extension of practices,” Choi said. “In game situations, I’ve tried opening my stance and experimenting with other things in my swing. I have to change to keep getting better.”

Choi said the team told him they were pleased with his hitting and that he should focus on his fielding at first base. Choi said he feels his glove is better than people think and that Cash has been praising his defense lately.

Choi, who bats left-handed, also bristled at the notion that he can’t hit left-handed pitching. Choi was 3-for-22 against southpaws in 2018 but he said the sample size was “too small” for anyone to peg him as a platoon player.

“In the minors, I batted around .260 to .270 against left-handers,” Choi said. “I am confident about hitting left-handed pitching.”

Of five Korean players currently in the big leagues - the Texas Rangers’ Choo Shin-soo, Los Angeles Dodgers’ Ryu Hyun-jin, Pittsburgh Pirates’ Kang Jung-ho and Colorado Rockies’ Oh Seung-hwan being the other four - Choi is the youngest. But he’s been in American pro ball longer than anyone in that group except Choo, who signed with the Mariners in 2000.

Choi said the past decade for him has been all about perseverance. Watching his contemporaries return to Korea over the years without reaching the majors, Choi admitted he was tempted to join them.

“I’ve come this far because I stuck with it for many years,” he said. “I used to ask myself, ‘Should I go home, too?’ But I had a few fans who supported me even when I was a nobody. They gave me the strength to carry on.”

With Choo being an All-Star and Ryu, Kang and Oh having earlier carved out successful careers in their native land before reaching the majors, Choi is the least glamorous name in the Korean contingent. But Choi said he has never been bitter about it.

“I am actually grateful that those veterans are playing in the big leagues. I think people got to know me a bit better because of the other players,” Choi said. “Hopefully, I’ll have more fans when I play more regularly in the majors.”

Choi spent some meaningful time with his parents during the offseason, traveling across America. He said his parents had long wanted to see their son in the United States, but when he was toiling in the minors, without his own place or car, he didn’t want them to see him struggle.

“It’s not all that luxurious, but at least I have a place where my parents can stay,” Choi said with a smile. “As we traveled around the country together, I felt so proud of myself.”