Son Heung-min of Tottenham Hotspur won the prestigious Player of the Year award at the London Football Awards 2019 on Thursday. 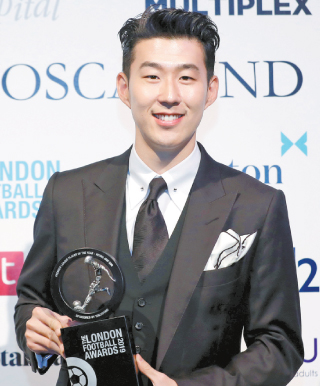 Tottenham Hotspur’s Son Heung-min poses with the Player of the Year award at the London Football Awards 2019. [REUTERS/YONHAP]

This was Son’s first Player of the Year award of any kind in his career in the Premier League. Son has scored 16 goals and added nine assists in 34 matches already this year.

The London Football Awards is an independent awards ceremony that raises money for the Willow Foundation, a charity that works with seriously ill young adults. Players from 12 professional London clubs are considered for the awards by a panel of judges that includes several former players, coaches and sports journalists.

Along with Son, the 2019 Player of the Year nominees included Pierre-Emerick Aubameyang of Arsenal, Eden Hazard of Chelsea, Harry Kane of Spurs and Andros Townsend of Crystal Palace.

“It means a lot,” Son was quoted as saying by the Daily Mail. “For me, it’s special, my first award [of this kind]. Many players have not won this trophy, so for me it’s really, really special, especially because such big names have won this award [in the past]. It means a lot and I’m very happy to win.”

Son won the Premier League’s Player of the Month award twice in the 2016-17 season, but this is the first time he has won any kind of Player of the Year award. The major footballing award season may still be to come, but winning the London award with a few months still left to play is a good start.

His achievement this season was even more impressive as it was accomplished after such a busy schedule with both his Premier League club and the Korean national football team.

Once the tournament ended, Son headed back to Spurs to continue his season. In January, Son once again re-joined the national team, leaving Spurs mid-season, to compete at the 2019 Asian Football Association Asian Cup in the United Arab Emirates (UAE).

As Korea was unexpectedly eliminated by Qatar in the quarterfinals, Son was able to return to Spurs earlier than planned. Since he returned, he has been on outstanding form, scoring 11 goals in 12 of his matches. Son hasn’t scored in Spurs’ two most recent matches - against Burnley FC and Chelsea.

Along with Son, Spurs manager Mauricio Pochettino was also given the top award, winning the London Manager of the Year award.

Ji was once again nominated for the award this year, but Vivianne Miedema of Arsenal Women was named the Women’s Player of the Year this year.