The National Pension Service’s (NPS) investment return slipped into the red last year for the first time since the 2008 global financial crisis. 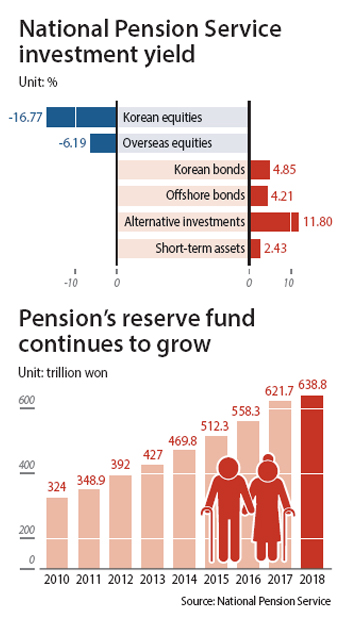 The biggest loss came from investments in Korean equities, which plummeted 16.77 percent. Offshore equities didn’t do much better, falling 6.19 percent.

The pension fund operator did turn a profit from bonds and alternative investments.

According to NPS, equities investment accounts for 34.8 percent while bonds take up 53.2 percent and alternative investments 12 percent.
While 99.9 percent of investments are in financial products, 0.1 percent is in welfare and other areas.

As of the end of last year, the total reserve fund grew roughly 2.7 percent compared to the previous year, or 17.1 trillion won, to 638.8 trillion won.

The NPS blamed the negative impact of global economic issues including the trade conflict between the United States and China for the loss.

“The weakened financial global market since the beginning of last year, including the rising credit insolvency of emerging markets, has had a negative impact,” said Ahn Hyo-joon, the NPS chief investment officer.

The NPS highlighted the instability from the trade conflict and the U.S. federal government’s shutdown as heavily affecting its performance in October and December.

While in November, the NPS investment return gained 0.27 percent, in October it lost 0.57 percent and in December 0.92 percent.

According to the NPS, the benchmark stock market Kospi in Korea fell 17.28 percent in 2018, while the MSCI ACWI ex Korea index, which represents large and midsized caps across 23 development markets and 22 emerging markets excluding Korea, fell 9.2 percent.

The NPS said Korea’s wasn’t the only pension fund that suffered. In fact, most global pension funds did worse.

Japan’s Government Pension Investment Fund is estimated to have dropped 7.7 percent while California Public Employees’ Retirement System is believed to have lost 3.5 percent in its investment. ABP, the Dutch pension fund, lost 2.3 percent.

Canada Pension Plan Investment Board was the only pension fund that made a profit as it changed its portfolio by increasing investment in alternative investment in contrast to equities.

The Canadian pension fund enjoyed an investment return of 8.4 percent.

But in the long term, the NPS said its investment profit wasn’t faring badly. The rate return since the fund was first established in 1988 is 5.24 percent, or 294.1 trillion won in profit.

The five-year annualized rate of return is 3.97 percent and the three-year rate is 3.48 percent.

NPS’s Ahn said that, this year, the pension service will continue to diversify its investments by increasing its investments overseas as well as alternative investments while raising expertise and efficiency within the organization.

The NPS said it is targeting a profit yield of 5.3 percent for the next five years.