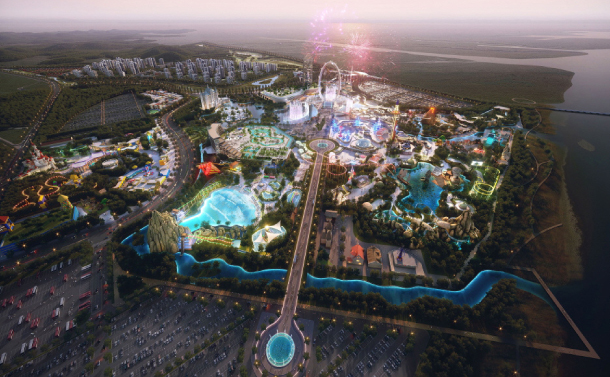 Aerial view of the Hwaseong International Theme Park, which is scheduled for completion by 2031. [K-WATER]

Shinsegae Property Consortium has been selected as the preferred bidder for the long-delayed Hwaseong International Theme Park project. The consortium — which brings together Shinsegae Property and Shinsegae E&C, the group’s construction arm — was the only bidder.

Korean Water Resources Corporation (K-Water), the government-owned water company, and Gyeonggi made the announcement Thursday.
K-Water is providing land for the project.

The consortium is planning to invest 4.5 trillion won ($4.05 billion) to construct the tourist complex, which will be equipped with recreational, leisure and commercial facilities, on 3.15 million square meters (778.38 acres) of land.

The construction in Songsan Green City in Hwaseong, Gyeonggi, will kick off in 2021, with a completion target of 2031.
The theme park will be partially open in 2026.

Toronto-based Forrec, an entertainment design company known for Universal Studios, will reportedly design for the theme park project.
The project is expected to boost employment while generating 70 trillion won of economic activity.

Gyeonggi expects the facility to draw eight million visitors annually. Visitor numbers could more than double to 19 million when the hotel and shopping areas are included.

The project will have a water park, a Jurassic world and a toy kingdom.

Planning for Hwaseong International Theme Park began in 2007, but the project was suspended in 2017 after twice failing to get underway.