Egypt is back, and seeking investment

Egypt is back, and seeking investment 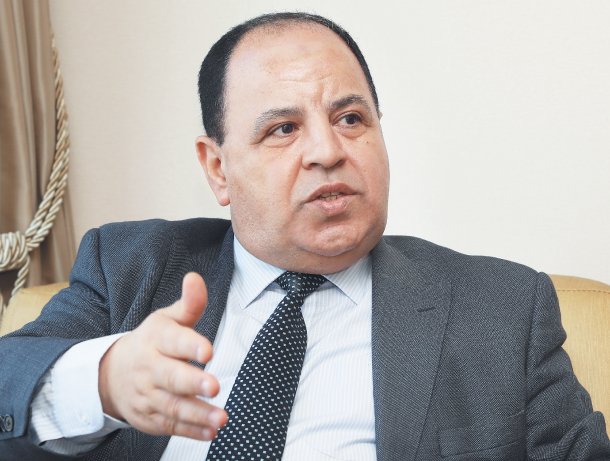 If you haven’t thought about Egypt lately, maybe you should, argues Mohamed Maait, the country’s finance minister. After a number of difficult years, the economy is staging a strong comeback, with GDP growth approaching 6 percent, debt down and other key metrics coming back nicely.

Maait, 56, was particularly cheerful when he spoke with the Korea JoongAng Daily on Feb. 25 at the Lotte Hotel in central Seoul during an official visit to Korea. Just a few days earlier, the country successfully issued $4 billion in sovereign bonds. The sale was oversubscribed and rates were particularly good for Egypt. Maait also noted that demand was strong at the longer maturities, with 30-year bonds sold.

The finance minister said that another bond will soon be issued, this time in another currency. A yen bond or a yuan bond are possibilities.

The four-day official visit included a Korea-Egypt business forum held at the Korea Chamber of Commerce and Industry in Seoul and round table meetings with major Korean companies, including Samsung Electronics, GS E&C, Daelim Industrial, Hyundai Rotem - which in January won a $134.5 million contract to supply six metro trains in Cairo - and Daewoong Pharmaceutical.

Joining him in Korea was Minister of Investment and International Cooperation Sahar Nasr.

In an interview on Feb. 27, she ticked off all the areas of investment opportunity, from infrastructure to transportation, but is especially focusing on manufacturing. She said Egypt has a new investment law, as well as a raft of supporting legislation, such as a new bankruptcy law (the country’s first ever), and noted that she has fast-track authority to deal with the various ministries to help foreign investors navigate the bureaucracy.

She also notes that human rights concerns are largely the result of “misperceptions.”

The ministers say that during previous trips, Korean companies were either uninterested in Egypt or were concerned about putting money into the country, especially since repatriation of profits could be difficult. This trip’s situation is completely different. Korean companies are not worried about getting their money out now. They are asking more substantive questions about the specifics of investment and incentives that may be offered.

Below are edited experts from the interviews:

Q. The numbers are starting to look quite good. What are your thoughts on the economy and economic prospects?

A. We were in a difficult situation, but the numbers are coming in nicely now. Our expectation for 2018 and 2019 is for 5.6 percent GDP growth. For the following year, we are expecting 6 percent. The arc from 2014 till now: GDP coming up, debt coming down.

It’s been a story of recovery.

To be honest, after 2011 was a difficult time. At one point, our hard currency reserves were below $15 billion, which was not enough to cover three months of imports. Many of our partners had to queue to get money, like airline companies. There was no hard currency to pay all our liabilities.

Reform started in 2015, and the International Monetary Fund (IMF) came in 2016. Our hard currency is now somewhere around $43 billion, which is more than eight months of imports.

All figures are improving.

In 2013-14, we had energy cuts every day; now we have surplus of production. We’re trying to export some of the surplus electricity. We used to import natural gas, but last September we stopped importing.

But there’s still a ways to go, right?

We still have a lot of challenges. We are here to address one of the challenges, which is to attract more foreign direct investment (FDI). Because we believe that we need to grow and we can’t grow the private sector without FDI, without improving our environment for attracting business: less bureaucracy, more automation, re-engineering our procedures - tax, customs, licensing, industrial allocation - because we believe to achieve lasting, sustainable growth, we need to restructure our economy.

So you’ve come here looking for investment, FDI. What kind of investment? Who are you targeting?

We are looking at all the roads. We’re looking for some sort of cooperation regarding technologies, electronics, construction and other sectors. What we are trying to do is first of all explain the situation in Egypt and what we’ve done over the last three years and what we are expecting to do in the coming three to four, five years and also on facilities we have to offer.

We are also planning to talk about the very successful Korean investments in Egypt. So we hope to attract more. And we also want to see what sort of cooperation we can get - it could be a loan, it could be joint ventures, it could be direct investment. We have many opportunities.

We have a free trade agreement with Africa. We have the Suez Canal Economic Zone, where we offer a lot of incentives, exemption from taxes and a lot of facilities. Power is available. Industrial land is available.

We also have cheap and very well-educated labor. We’re looking more on manufacturing. We are very much interested in more production.

And what about larger projects, like building zones or helping in the construction of entire cities or smart cities, or developing infrastructure projects?

We are building the New Administrative Capital. Definitely, we need Korean technology and construction and IT, electronics for expansion of the city and infrastructure.

Let me say we have many opportunities. We are working on many renewable energy projects and petrochemicals as well. So we have many other areas where Korean investment can contribute.

So there’s no shortage of opportunities.

We are growing at a good rate. We are coming from 2.3 percent GDP growth just a couple of years ago, and we’re now looking at 6 percent growth.

So the Suez Canal has the infrastructure and it has many companies specializing in the shipping industry, but they don’t have the technologies.

What about the security situation in the country? What would you say to investors?

People are killed in France, in London. So why don’t you worry about security in France or London or Germany, and why should be afraid of one incident in Egypt?

Egypt is like any other country: it can happen anywhere in the world. But ask the businesspeople who travel from around the world to Egypt and ask them whether Egypt is safe. They will tell you it is safer than countries where you can’t even walk at 9 p.m. You can even see today that most of the European leaders are in Sharm El Sheikh for a summit.

Egypt’s security is one of the best, and this is why Egypt is growing near 6 percent. There are only a few countries growing 6-plus percent. That’s a reflection of security and stability.