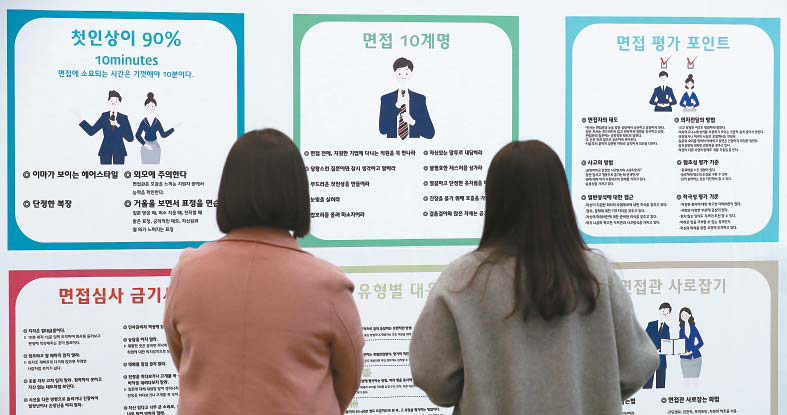 Unemployment feels much higher than official figures, while people feel as if they are earning too little, according to a recent survey.

Kim Sung-ho, a university graduate, has been looking for work for a year to no avail even though he majored in business and his GPA and Toeic scores are above average.

“Among my close classmates, it seems that three to four of them are unemployed, so I think the reality is different from the employment statistics announced by the government,” said Kim.

The government’s core policy is to drive growth with higher wages and more jobs, but the data suggest that the policy isn’t working. Recent research shows that reality is far worse than the headline numbers.

To individuals, the unemployment rate feels about 27.36 percent, according to a survey conducted by the Graduate School of Public Administration at Seoul National University.

That is more than six times the official 4.5 percent rate in January.

The survey polled 6,300 adults nationwide for two months from October 2018 on three topics: how people perceive the role and scope of the government, the quality of life and government policies.

“Major countries with a 20 percentage point difference include Spain and France, where unemployment is a serious issue,” said Kum.

“In countries like the United States, Germany and Britain, where the economies are relatively stable, the difference is no more than about 10 percentage points,” he added.

In some regions in Korea, the number was particularly high. North Gyeongsang led at 33.62 percent and North Jeolla followed at 33.17 percent. Ulsan came in at 32.21 percent, while Daegu had the lowest rate at 22.94 percent.

Not only does unemployment feel worse than it is officially, but people are also feeling poor. Among the respondents, 68.29 percent thought their earnings were too low.

Among those who opposed to the 52-hour workweek, 67 percent said that any increase in job numbers was simply the result of the same work being done by more people.

Among those who welcomed the new policy, 62 percent said it is burdensome for companies to make new hires.

The results are seen as evidence of a drop in confidence regarding earnings ability. They also indicated a negative outlook regarding major policy initiatives of the current administration.

In terms of how the rich made more money, 40.77 percent responded that they did it by investing in real estate. A full 50.13 percent support the idea of an increase in the property tax.

Of those surveyed, 57.7 percent felt as though they got less from the government than they paid in taxes.

“Despite the income-led growth policy, most people do not consider their income high enough, so the government needs to re-examine the effectiveness of the policy in general,” said Kum.