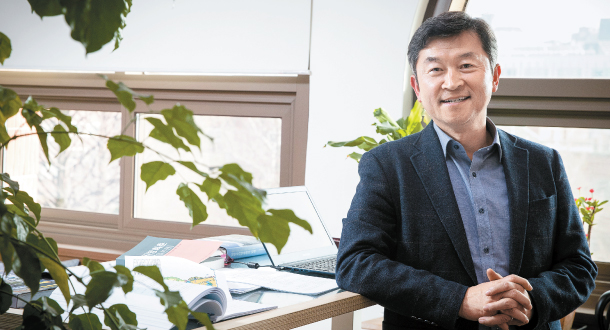 “Just because an old person is sick doesn’t mean that he should tear out all his organs,” says Prof. Jeong Seok from the Department of Urban Planning & Design at the University of Seoul. “He is cured and lives on. That’s what it means by urban regeneration.” [JANG JIN-YOUNG]

The “New Deal” urban renewal program was announced last March by the Ministry of Land, Infrastructure and Transport. The project, one of President Moon Jae-in’s campaign commitments, will “regenerate” old areas in the city by preserving infrastructure and the community to combat urban decline. Rather than tearing down what exists by driving out residents, preservation will be the goal. According to the ministry, the government plans to regenerate 5,000 areas in the country over five years, spending a total of 50 trillion won ($46.5 billion).

An example of past regeneration is the work done in Seongsu-dong, eastern Seoul. The region, once a crowded, industrial area popular with shoemakers, experienced social, cultural and economic decline after the 1990s. Around 2012, the government began a regeneration project in the area, designating it as a “special district zone for handmade shoes.” The government invested huge sums helping local shoemakers survive and, at the same time, encouraged cultural development in the area. Seongsu-dong eventually came back and became crowded with small cafes, restaurants and small retail shops.

But the heyday did not last long. As culture flourished, many residents fell victim to gentrification. An increasing number of visitors and affluent newcomers led to soaring shop rents, and the locals, including artists and merchants, were unable to keep up with the costs, and eventually had to move away. They also started to criticize the government’s project, saying that it interfered too much with their area. Other popular destinations, like Samcheong-dong in northern Seoul and Gyeongridan-gil in Itaewon-dong, central Seoul, also experienced a similar fate.

Prof. Jeong Seok from the Department of Urban Planning & Design at the University of Seoul said that “money and political perspectives are destroying the essence of urban regeneration.”

“Urban regeneration means taking care of the country as if taking care of one’s body,” he said. “Simply constructing more buildings cannot save an area that is on the brink of collapse. People who newly move into the region must also be able to survive there.”

For more on the topic, the JoongAng Ilbo sat down with the professor in his office on Feb. 19. The following is an edited excerpt of the interview.

Seongsu-dong, western Seoul, top, is a good example of a government urban regeneration project. Yeonnam-dong in western Seoul, middle, is currently experiencing gentrification. Artists and locals from Euljiro and Cheonggyecheon in central Seoul, above, protest against the government’s redevelopment project. The project has been placed on hold due to strong public criticism. [JOONGANG ILBO, YONHAP]

A. We are currently transitioning from a “developing” era to a “regenerating” era. Trials and errors are inevitable. A city is equivalent to life. It’s not something made out of air; it coexists with the land, water and nature. In the past, builders would respect the culture of an area when constructing houses in that area. But with the rapid development of architectural technology, they have become increasingly arrogant. With the introduction of steel frame construction and elevators, it became possible to build high, 100-story buildings. “Planned cities,” like Washington, Canberra and Brasilia, were also constructed. Western societies, however, soon realized that such cities, planned and constructed by humans themselves, like inventions, were not always a good idea. After realizing the limitations of such cities, they began to apply what’s good from both the old and modern styles of construction: to preserve the old cities by maintaining and taking care of them well. This is also what you call regeneration.

What is the history behind urban development in our country?

We experienced a period of rapid urban development running from around the 1960s to 1990s. Former President Lee Myung-bak tried to carry out a redevelopment project called the “new town” while serving his term as a Seoul city mayor. Small residential complexes were reconstructed and redeveloped into big cities. The importance of “regeneration” instead of “redevelopment” is apparent if you take a look at the popular regions in Seoul these days. They are not the ‘big cities’ with many skyscrapers and cars; they are the places where old, detached buildings with just a few stories are connected with cafes and small alleys. These are places where people these days want to visit. An area is only revived when people visit them.

The current government has proposed a “regeneration” project but a lot of people criticize it as a “redevelopment” project. What are the origins of this conflict?

Conflict is inevitable because of politics and capital. Some are trying to seek capital gains from regeneration. Some are trying to use it to win favor in elections. Some demand redevelopment in the name of regeneration. The very same government that proposed the regeneration project is trying to build a new town in metropolitan areas, and I strongly disagree with that. New towns are a part of development. When the city of Wonju [in Gangwon] was transformed into a “new, innovative town,” the results were disastrous because of the declining population in the region. The same happens to many other “new towns” in regional areas. The cities in Korea right now are overcrowded, while other regions are on the brink of extinction. We cannot let more people move into cities anymore. The opposite must happen.

Isn’t building new buildings in other regions the solution to overcrowded cities?

No, rather than resorting to constructing new buildings and roads, [the government] must provide a safety net where people can live safely and have kids. Currently, regeneration projects in these areas are focused on construction, probably to prove that they are not wasting their money provided by the Ministry of Land, Infrastructure and Transport. Such buildings usually end up empty. Once again, the core of regeneration must be on providing a safety net.

What could be a solution to gentrification?

This may be too obvious an answer, but it is to find a win-win solution. The owner of a building obviously wants to raise its rents, but that only results in gentrification. When affluent residents move into a newly rising area, make profits and then move back out, the damage is done to the owners. Rather than just seeking personal gains, they must look for a collaborative solution with other owners and tenants.

What do you think about problems surrounding the redevelopment project in Euljiro? The Seoul city government originally announced a plan to tear down some areas in Euljiro but decided to scrap the plan after strong criticism from locals.

Tearing down buildings without local agreement is what’s called redevelopment. Right now, when an area becomes subject to redevelopment, the development company - and not the landowner - gets the authority to reconstruct that place. It’s a big problem. It’s only when [the government] stops designating certain areas as subject to redevelopment that alternative solutions can be brought up. When the locals themselves have more freedom to fix their own houses and buildings [without government intervention], they will be more open about redevelopment. The reason why building owners in Euljiro are in such rage is because they had never had the freedom to fix even their own bathrooms until the government decided to tear it all down. This never happens in other developed countries. In other words, peaceful urban regeneration is impossible with the current designation policy.

Some people call urban regeneration “urban acupuncture.” What does this mean?

In the 1970s, Jaime Lerner, a former mayor of Curitiba, [the capital of Parana in southern Brazil,] used the term “urban acupuncture” to refer to his innovative idea on how to resolve traffic problems and regenerate a city. Instead of relying on a big construction project, he tried to minimize intervention and concentrated on specific areas that needed fixing, just like a small needle fixes a big body pain. Instead of constructing an expensive railway, Lerner invented the Bus Rapid Transit (BRT) system, [a bus system that runs on dedicated lanes.] The result was a cost-effective innovation, using only one-twentieth of the cost of building a railway system. Recently, Daegu and Gwangju have announced that they would build more subways, but that’s pure nonsense. They will not be able to cover the expenses in a city with only one to two million people. Why build a subway if you have alternatives like the BRT? The only reason I can think of is that there are people who gain personal profit through such construction. A lot of road and railway construction projects get exempt from the government feasibility studies, which are carried out on big-money projects. I heard that Busan is also planning to construct a subway. It looks like we are still living in the development era. I know that we already have a good railway system. It’s sad to see how people are resorting to such construction for political reasons.

Bogota and Medellin in Colombia are good examples of urban regeneration. Medellin is a poor region, but the city revived with the construction of cable cars in the mountainous regions. Many cities around the world no longer tear down already existing regions and carry out big construction. This is done only in countries like Korea, China and some in the Middle East.