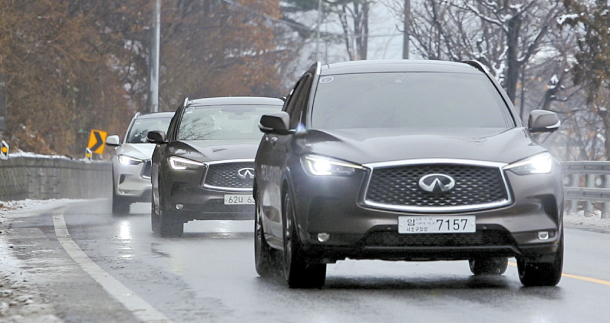 GAPYEONG COUNTY, Gyeonggi - As the auto industry gets increasingly excited about a future filled with high-tech electric vehicles, traditional petrol engines hardly ever get the spotlight.

During a roughly 50-kilometer (31-mile) drive on a snowy Feb. 20 in Gyeonggi, the Korea JoongAng Daily took the QX50 through its paces. It impressed in both acceleration and stability on far from ideal slushy, snowy roads.

The QX50 immediately surprised with its punchy acceleration. Considering its size, the crossover quickly accelerated from stationary, boasting up to 272 horsepower and 38.7 kilogram-meter (280 pound-foot) in torque.

Infiniti touted the engine as a product of more than 20 years of work and, on paper, it is a remarkable leap forward in technology.

The crossover moved confidently down the highway, producing a comfortable ride even while navigating the slippery surface after snow had fallen for hours. The vehicle maintained its composure, travelling at speeds over 100 kilometers per hour (62 miles per hour) with ease and blocking out much of the road and tire noise.

The vehicle’s continuously variable transmission, however, has a slight artificial feel in mimicking gear changes. The imitation shifts to higher gears were hardly bothersome, but something didn’t feel quite right in the way the car sped up that didn’t manage to mimic the real sensation of changing gear.

One area of concern was the vehicle’s brake pedal, which needed to be fully pushed to the floor in order to completely stop the vehicle.

Nitpicking aside, the full package will likely satisfy drivers looking for a luxury crossover with balance in acceleration and comfort.

Meanwhile, the weather turned for the worse as the snow thickened off the highway and into the winding roads of Gapyeong County.

The QX50 responded relatively well to the sharp corners of the country roads and maintained much of its composure as it did on the highway, although this was largely due to the fact that its speed was kept below 60 kilometers per hour given the slippery surface.

The all-wheel drive vehicle had no problem climbing slippery inclines.

Given that there were many factors to consider, including the weather, it wouldn’t be fair to completely dismiss the brand’s promised efficiency through the VC-T engine.

The luxury crossover also didn’t impress with its smart safety features, such as moving object detection, blind-spot warning and distance control assist, which weren’t apparent throughout the drive.

When it comes to design, the QX50 comes in an all-too-familiar Infiniti look with its human-eye inspired headlamps, double-arched grille and crescent cut c-pillar.

The exterior look is neither adventurous nor dull, and is guaranteed the occasional glance from others on the road.

Inside, the vehicle falls in line with luxury class expectations, with soft-touch leather all around and plenty of space, although complemented by some odd design choices.

On the front row, the vehicle is equipped with two displays, one for navigation and the other for media control. The division between the two, which lacks a uniform look, gives off a dated vibe compared to the wide, long single displays offered by competitors.

Meanwhile, the second-row seats offer plenty of space with loads of headroom thanks to a panoramic sunroof.