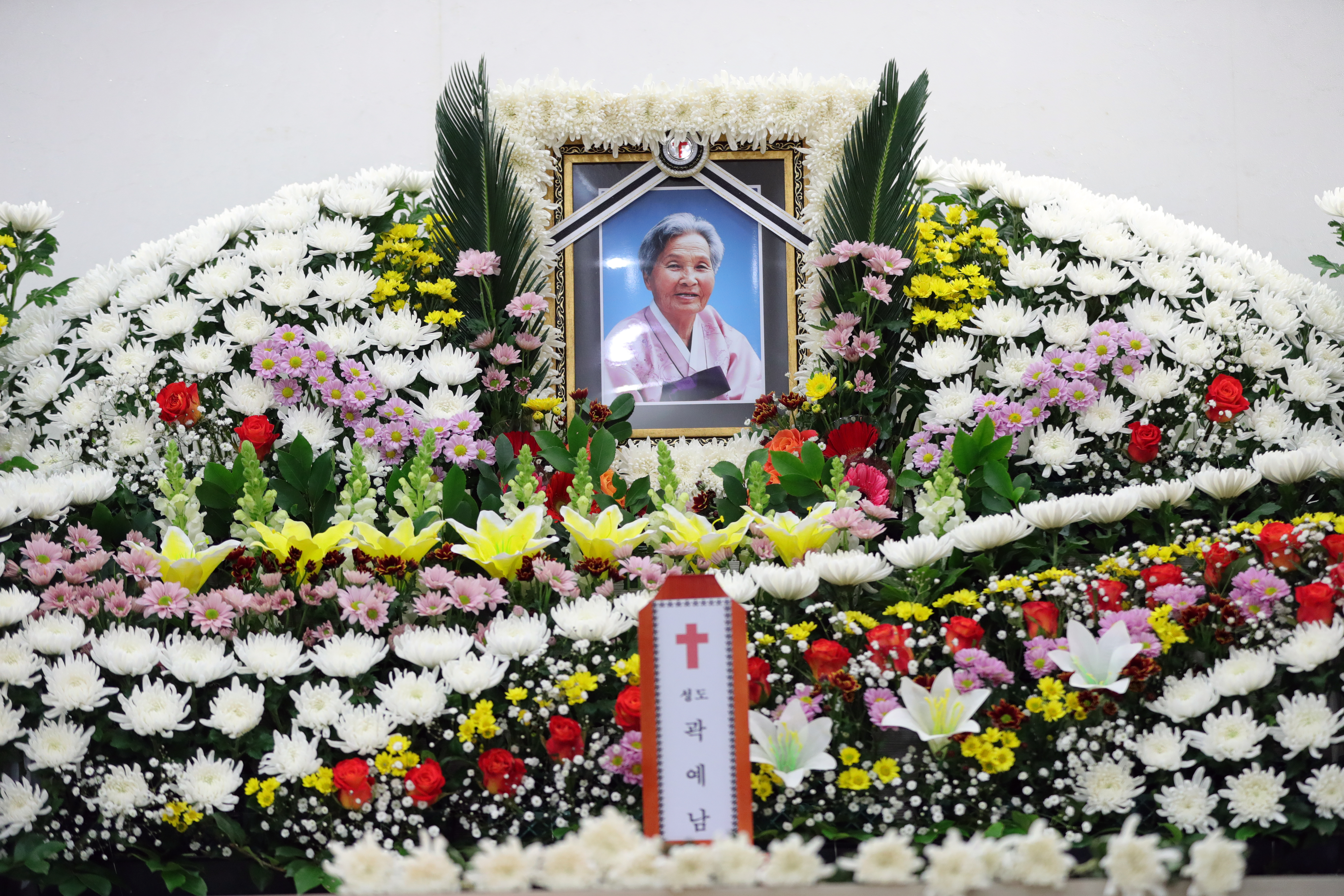 A mourning station is set up for the funeral of Kwak Ye-nam, a victim of Japan’s wartime sexual slavery, at Jeonju Hospital in Jeonju, North Jeolla. [NEWS1]

A South Korean woman forced into sexual slavery for Japanese troops during World War II died Saturday, her family said, bringing the number of surviving victims down to 22.

Kwak Ye-nam died at the age of 94, having suffered from pneumonia since 2015, according to her family.

She was forced into sexual slavery for Japanese troops in 1944 at the age of 19. Japan ruled the Korean Peninsula from 1910-45. Following World War II, Kwak lived for 60 years in China before coming to South Korea in 2004. She was diagnosed with pneumonia in December 2015.

Her death brought the number of surviving victims, euphemistically called comfort women, to 22.

About a month ago, Kim Bok-dong, a symbolic figure and victim who let the world know about Japan’s wartime brutality, died at the age of 93. Historians say that around 200,000 Asian women, mostly Korean, were forcibly sent to front-line brothels to provide sex services for Japanese soldiers. South Korea and Japan signed a deal to address the hardship of the wartime victims in 2015 and established a foundation to support them.

In November, the Moon Jae-in administration announced its decision to disband the Tokyo-funded foundation amid criticism that the 2015 deal was signed without sufficiently consulting the victims or a sincere apology from Japan. Meanwhile, the mayor of Glendale, Calif., will visit the Korean port city of Busan this month to view a statue symbolizing Korean women forced to work in wartime Japanese military brothels, a statement from the assembly of Busan’s Haeundae District said Sunday.

Glendale Mayor Zareh Sinanyan is scheduled to arrive in Busan on March 13 to sign a pact on friendly relations and cooperation with Haeundae District. Glendale is home to DreamWorks, a U.S. animation studio, while Haeundae is known as the host of the annual Busan International Film Festival. During his stay in Busan, the U.S. mayor plans to visit a site in front of the Japanese Consulate, where a life-size statue depicting a girl symbolizing the “comfort women” already stands.

Glendale made headlines in 2013 when it erected a statue representing victims of Japan’s wartime sexual enslavement. In 2014, a U.S. court rejected a demand from a right-wing Japanese group that the statue be removed from the Central Park near the Glendale Public Library.