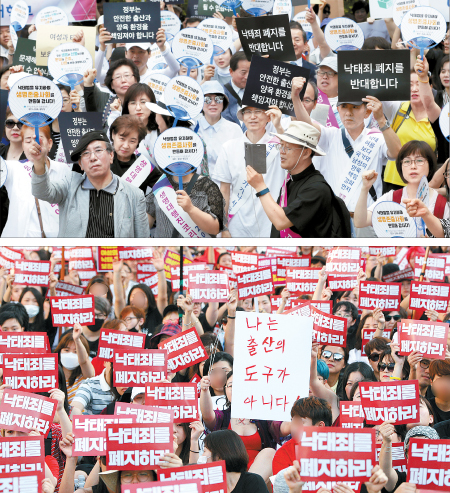 Top: Catholics hold an anti-abortion rally in front of Myeongdong Cathedral in June 2018 as part of the annual Life March Korea to oppose any change to the current abortion ban. The event, named after the Life March in the United States, which started in 1970, was the seventh of its kind. Above: Women’s rights activists hold a pro-choice rally at Gwanghwamun Square, central Seoul, in July 2018, demanding the country’s decades-long abortion ban be scrapped. [NEWS1]

The outcome of the latest survey by a state-run think tank will likely affect the upcoming ruling by the Constitutional Court on Korea’s abortion ban, experts say.

A survey released by the Korea Institute for Health and Social Affairs on Feb. 14 indicated that abortions are routinely performed at clinics nationwide despite being illegal. According to the survey, 75.4 percent of women aged 15 to 44 said that the law that bans abortion should be changed.

The Constitutional Court is currently considering a petition to review clauses in the Criminal Act that punish both the mother and doctor for abortions, with few exceptions. The petition was submitted in February 2017 by a doctor who was indicted for performing 69 abortions.

It is highly likely that the court will announce the ruling before two of its judges complete their tenures in the coming weeks. Justices Seo Gi-seog and Cho Yong-ho will end their terms on April 18.

“The schedule is not finalized yet,” an official of the Constitutional Court said. “But justices tend to rule on a case when it is considered a major issue.”

The doctor challenged the constitutionality of two articles in Korea’s Criminal Act which were passed in 1953.

“A woman who procures her own miscarriage through the use of drugs or other means shall be punished by imprisonment for not more than one year or by a fine not exceeding 2 million won [$1,770],” reads Article 269 of Korea’s Criminal Act.

“A doctor, herb doctor, midwife, pharmacist, or druggist who procures the miscarriage of a woman upon her request or with her consent, shall be punished by imprisonment for not more than two years,” Article 270 of the act also says.

“Public opinions are a factor in a constitutional trial concerning a socially controversial issue,” said Noh Hee-bum, a lawyer who served as a researcher for the Constitutional Court. “When the court ruled the ban on abortion constitutional in 2012, half of the judges ruled against it. This year, there is a high possibility that the court will conclude that the ban is “uncomfortable” and order the revision of the Mother and Child Health Act to expand exceptions.”

According to the court, the uncomfortable conclusion means that the court “acknowledges a law’s unconstitutionality but merely requests the National Assembly to revise it by a certain time while having the law remain effective until that time.”

This decision is often handed down in order to avoid the legal vacuum and social confusion that may results from the immediate abolition of a law.

While the Criminal Act bans abortion, exceptions are currently noted under the Article 14 of the Mother and Child Health Act.

Currently, a doctor may perform an induced abortion operation with the consent of the pregnant woman herself and her spouse only if one of them suffers from genetic mental disability or physical or contagious disease.

Many religious communities oppose abortion because they believe life starts at conception, while women’s communities and civic groups argue that women’s right to choose must be respected during the early and middle stages of pregnancy.

“When abortions are conducted secretly, there is a high health risk to women’s bodies,” said Prof. Yun Ji-yeong of Konkuk University’s Institute of Body and Culture. “Women’s basic rights are being ignored.”

Some religious leaders, however, says abortion is an act of murder.

“Pregnancy is the starting point of life, and aborting an embryo is an act of murder,” said Father Jeong Jae-woo, dean of the Nicholas Cardinal Cheong Graduate School for Life at the Catholic University of Korea. “Giving legitimacy to abortion means that the country will not oppose this act of murder.”

Both sides agree that men must face more responsibility, however.

“The current law punishes the mother and doctor, while the father is not held accountable,” said Yun. “This law must be changed.”

Father Jeong agreed. “The system must be changed so that women and men must be held jointly responsible for pregnancy and childrearing,” he said.

“Instead of deciding which is more superior between an embryo’s right to live and a woman’s right of self-determination, we must consider the enormous impact that an involuntary pregnancy has on a woman’s life,” said Cha Jin-a, professor of law at Korea University.

The Constitutional Court ruled on the abortion law for the first time in 2012.

Experts say the current court is far different from that of 2012. All the judges who ruled on the case are retired, and six new justices started their terms after the Moon Jae-in administration took over in 2017. Constitutional Court Chief Justice Yoo Nam-seok and Justices Lee Eun-ae and Lee Young-jin have clearly said they believe the abortion ban is unconstitutional during confirmation hearings.

Justices Lee Suk-tae, Kim Ki-young and Lee Jong-seok did not make their positions clear during the confirmation hearings. The other three judges’ positions are also unknown.

“The Constitutional Court has long been passive, rather than being a pioneer,” said Lee Jong-soo, a professor of law at Yonsei University. “It is possible that it may rule again that the ban is constitutional because it thinks there is no social consensus on abortion yet.” The Ministry of Justice insisted that the abortion ban must be ruled constitutional.