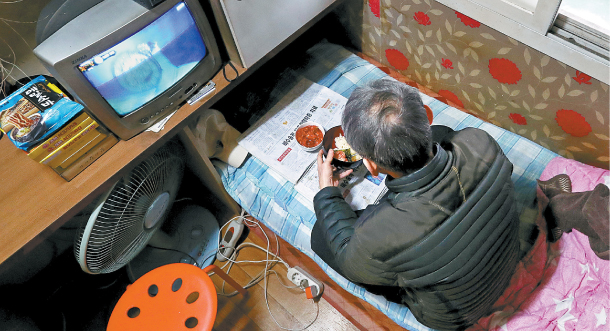 Mr. Im, a recipient of the government’s basic living subsidy, eats lunch on Lunar New Year in his room in Gangbuk District, northern Seoul. Im spent almost 30 years moving from place to place working in construction. During this time, his health deteriorated. Now, he lives alone without any plan for marrying or finding a partner. [JANG JIN-YOUNG]

“I haven’t thought about marriage,” said 59-year-old man surnamed Im. “I gave up having family years ago - I don’t want to make my wife or my children suffer from poverty because of me.”

Im, a recipient of the government’s basic living subsidy, has lived alone for 40 years. For 30 of those years, he moved from place to place, looking for temporary construction work.

He now lives in a 3.3-square-meter (35-square-foot) room in a gosiwon (boarding house) in Gangbuk District, northern Seoul. Besides his clothes, all he has in the room is a seven-inch television. Im has no family or children. His oldest brother died a few years ago and his other brother also works as a construction worker and is unmarried. Im lost contact with his two sisters long ago.

“I have never been in a relationship before,” Im said. “I couldn’t afford to see anyone - let alone marry. After I turned 40, I gave up on marriage altogether.”

Im’s family has been poor ever since he was born. His parents worked in a rubber manufacturing factory, and the pay was not enough to feed Im and his five siblings. After he finished his high school education, there was nothing Im could do but to work in a construction site, making a hand-to-mouth subsistence every day.

Working in construction took its toll on Im’s body. In his mid-40s, his knee joints began to deteriorate, and he found a new job delivering newspapers.

“Newspaper delivery starts at dawn, which means that I had to go to bed early,” Im said. “But I had trouble falling asleep, so I drank a bottle of soju every night before I went to bed - living like this for 10 years gave me diabetic neuropathy.”

Since he doesn’t have the money to get proper treatment or suitable medication, Im’s diabetic complications became worse. It eventually became impossible for him to deliver newspapers due to his shaky hands. In March 2018, he quit his job and started receiving the basic living subsidy in December last year.

“There are times though, when I wish I married and had someone to look after me. But at the end of the day it all comes back to, ‘if I hadn’t been so poor then I would have someone that’s willing to marry me,’” said Im.

Poverty and solitude are inextricably linked. According to a JoongAng Ilbo survey of 130 recipients of the basic living subsidy, 83 people, or 63.8 percent, said they live alone.

“Living a solitary life is the case for most recipients of the basic living subsidy - if you are born from a poor household, then you have a lower chance of getting a good-quality education, which means you have lesser chances of getting a decent job that might give you the opportunity to find a spouse,” said Kim Mi-gon, a researcher from the Korea Institute for Health and Social Affairs. “If you don’t have the money, there are so many things you need to give up, since everything else just requires more money. That’s where Korea’s welfare policy needs to change - there aren’t enough chances for the poor to escape from poverty due to their lack of education.”

But this isn’t the only aspect of Korea’s welfare policy that is facing criticism. While there are people living alone suffering from poverty like Im who are recipients of the basic living subsidy, there are people like 77-year-old Kim Jung-ja, who only gets 250,000 won ($223) a month from the government. This is less than half of what a single-person household would receive through the basic living subsidy (510,000 won).

Kim is excluded from the National Basic Livelihood Security Law due to family support obligation rules. These people are the poor who suffer from poverty just like the recipients of the basic living subsidy, but do not receive the same financial assistance from the government because they have family members who could assist them.

Kim lives alone in a small apartment near Seoul. It has become a ritual for her to skip two meals a day, since at her income it is a luxury to even buy herself a meal. Her weight has dropped to 40 kilograms (88 pounds), and she suffers from chronic enteritis as well as hearing loss.

To save on heating bills, she doesn’t turn on the heater even though her room drops below zero degrees Celsius (32 degrees Fahrenheit) - instead, she bundles up under layers of sweaters to keep herself warm.

Ms. Kim had been living as a recipient of basic living subsidy for nearly 30 years until her daughter-in-law, who separated from her son, inherited a small house from her parents three years ago. Kim then stopped receiving the subsidy, because according to family support obligation rules, her daughter-in-law has the capacity to financially support her.

“I can’t believe that I’m not receiving anything from the government because of the property owned by a daughter-in-law who doesn’t even care if I’m even alive or dead,” said Kim.

The number of people like Kim has been increasing ever since 2015. Despite their needs, about 2.1 percent of the population (3.5 million) is excluded from the National Basic Livelihood Security Law because of family support obligation rules.

“There are some clear problems with the family support obligation rules that exclude a large number of poor people from their entitlement to social assistance benefits,” said Oh Geon-ho, chairman of the nonprofit organization My Welfare State. “The government has been unresponsive to the sharp decrease in family support caused by urbanization and family nuclearization. Society is changing, and we need additional intervention from the state.”

Song Da-young, a professor of social welfare at Incheon University, also suggested the elimination of family support obligation rules as a solution to the vicious cycle of inherited poverty.