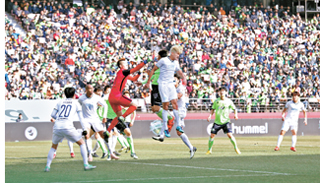 Gyeongnam and Daegu will compete at the premier Asian club football tournament for the first time.

The AFC Champions League (ACL) features 32 teams, divided into eight groups of four. The teams from West Asia make up Groups A to D, while East Asian clubs are in Groups E to H. The top two clubs from each group will advance to the knockout stage that begins in June. The two-leg final is set for November.

The clubs in the top-tier K League 1 have 11 continental titles combined - including Asian Club Championship honors - the most of any league. The latest crown was achieved by Jeonbuk in 2016 with a victory over Al Ain of the United Arab Emirates (UAE).

Jeonbuk, the reigning K League 1 champions, will chase their third Asian crown with new head coach Jose Morais, who took over the helm in December after departure of Choi Kang-hee.

Best known for his role as the right-hand man for Jose Mourinho, Morais won the UEFA Champions League two times with Mourinho when they worked for FC Porto and Inter Milan. Now, Morais is taking that experience to the Asian stage.

Last year, Jeonbuk was eliminated in the quarterfinals after losing to fellow K League 1 team Suwon Samsung Bluewings on penalties.

Jeonbuk is already known for its star-studded squad, and it added more depth by bringing local big names such as Moon Seon-min, who was the leading scorer among Koreans in the 2018 K League 1, Choi Young-jun, a midfield workhorse who was named all-K League 1 squad last year, and Hang Seung-gyu, an attacking midfielder who was chosen as the 2018 K League 1 Young Player of the Year.

In its 12th ACL, Jeonbuk is in Group G, which features Urawa Red Diamonds of Japan, Beijing Guoan of China and Buriram United of Thailand. Urawa and Beijing are winners of their country’s FA Cup, while Buriram topped the Thai league last year.

Morais’ Jeonbuk coaching debut ended in a 1-1 draw against Daegu in the K League 1 opening match on Friday.

He will try to collect his first win with Jeonbuk in the team’s 2019 ACL opening match against Beijing at Jeonju World Cup Stadium in Jeonju, North Jeolla, Wednesday. The match will likely see Beijing’s Korean defender, Kim Min-jae, play against his old team. Kim joined Beijing in January.

Gyeongnam hopes it can repeat its sensational domestic performance at the ACL. Last year, Kim Jong-boo’s team surprisingly took the runner-up spot in the K League 1 after earning promotion from the second-tier K League 2. The team is off to a good start in 2019, beating Seongnam FC 2-1 in their K League 1 opening match last week.

Jordon Mutch, a skillful midfielder from the English Premier League, and Luc Castaignos, former Inter Milan and Feyenoord striker, will make their ACL debuts with Gyeongnam.

Gyeongnam is in a relatively easy group compared to other Korean clubs in the ACL. The team is paired with defending ACL champions Kashima Antlers from Japan, Malaysian league winners Johor Darul Ta’zim, Defehima Antlers and Chinese outfit Shandong Luneng in Group E.

Kashima and Shandong joined the group stage through playoffs after they finished third in their respective leagues.

Daegu finished seventh in the K League 1 last year, but earned a spot in the ACL as the Korea Football Association Cup winners. It was the first trophy in the team’s history.

Daegu is in Group F, which includes two-time ACL champions Guangzhou Evergrande of China, Sanfrecce Hiroshima of Japan and Melbourne Victory of Australia.

Both Guangzhou and Hiroshima were runners-ups in their leagues. Melbourne was the 2018 A-League Grand Final winners.

Daegu will play its first ACL match in Australia against Melbourne. Andre’s team’s first task will be recovering from travel fatigue.

Last year, the team suffered a round of 16 exit after losing to Suwon. But Ulsan may have avenged that defeat on Friday by edging Suwon 2-1 in their K League 1 opening match at home.