Graffiti artist Tanc goes from the streets to the gallery

Graffiti artist Tanc goes from the streets to the gallery 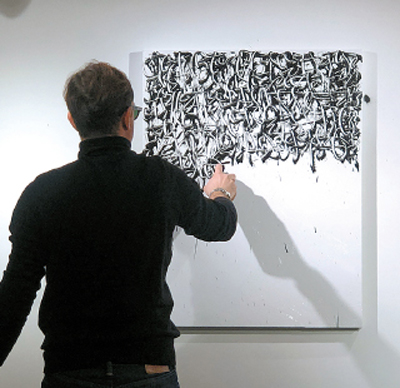 French abstract graffiti artist Tanc has opened a solo exhibition at Gallery Joeun in Hannam-dong, central Seoul, his first in the city.

The 25-piece show highlights Tanc’s style: an intricate blend of calligraphy and graffiti against smooth gradations of vivid pinks, blues and yellows.

Tanc refined his artistic voice over many years of traveling and observing the alphabets of many different languages.

“My travels around the world helped inspire my calligraphy,” Tanc explained last Tuesday during a press briefing at Gallery Joeun ahead of the launch of his exhibition.

“There are alphabets, like Arabic, that are cursive, and there are those, like Korean, that are more angular. These helped me create a new writing of my own; some people have told me that my graffiti reminds them of an extinct language that’s no longer in use.”

The spray-painted words on Tanc’s canvases were not written to be understood; rather, they’re meant to be appreciated for the shapes they create and for the effortless harmony they achieve with the pleasantly colored, almost mystical background.

“I started with black and white calligraphy. But, as time passed, I started adding some colors that mirror sunsets and sunrises, when the sky becomes almost surreal,” said Tanc. 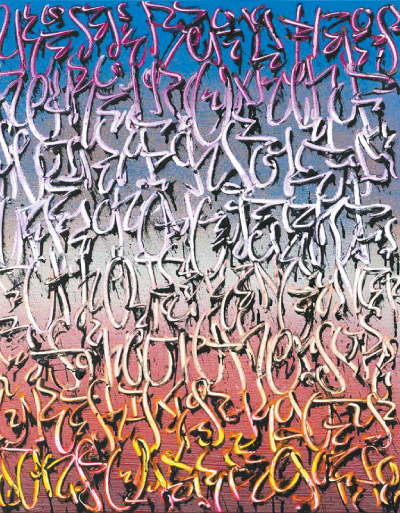 Tanc’s journey as an artist has come a long way since his street graffiti beginnings.

The French artist began spray painting as a teenager, often getting caught - and arrested - by police for vandalism. After seeing works by the likes of famed graffiti artist Jean-Michel Basquiat, however, Tanc was persuaded to transfer his artworks from the walls of deserted buildings in Paris to a more permanent location: the canvas.

Tanc still thinks fondly of his younger years as a street artist. “Graffiti is not an act of destruction but of leaving art in the streets,” he said, adding that it hasn’t been long since he last tagged the streets of Paris.

More recently, Tanc’s artistic style was influenced by experiences in Korea, where his wife is from.

Tanc frequently travels back and forth between France and Korea, and has already participated in several group exhibitions and art fairs here, most notably at a 2016 Busan art project celebrating the 130th anniversary of the establishment of diplomatic ties between the two countries.

Inspired by Korean monochromatic art, Tanc’s new oil paintings, on display at the exhibition, also play with paint as a medium. They’re composed of thick layers of oil squeezed directly from the tube onto the canvas, swirled into tiny circles that resemble meringues.

“I used a new material - oil - to create more depth,” Tanc explained. “Instead of using a paint brush, I squeezed oil paint from a tube and applied it directly onto the canvas, which is kind of like using a spray can.”

For Tanc, it’s the spray can and the oil tube, rather than the brush and the palette, that enable him to create art.

He follows in the tradition of American painter Jackson Pollock’s technique of action painting, using the force of his whole body in movements that can almost be considered art in themselves.

The exhibition at Gallery Joeun is open through March 22 Mondays through Saturdays from 10 a.m. to 6 p.m. Admission is free. For more details, visit galleryjoeun.com