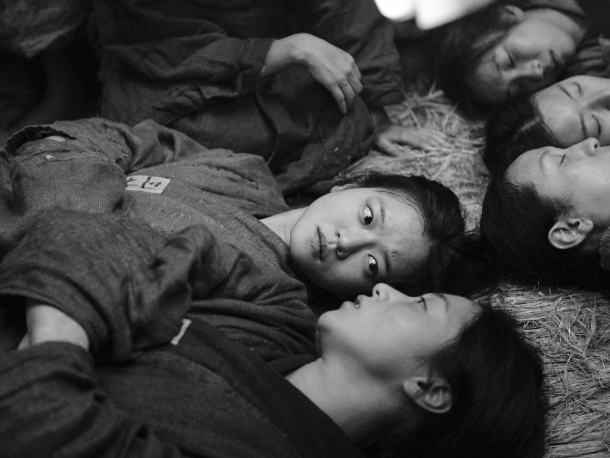 Coinciding with the centennial anniversary of the March 1 Independence Movement on Friday, “A Resistance” - a film depicting the life of Korean independence activist Yu Gwan-sun (1902-20) - shot to the top of Korea’s weekend box office and knocked last week’s box office winner “Svaha: The Sixth Finger” down to number two.

According to data provided by the Korean Film Council on Monday, “A Resistance,” starring actors Ko A-sung, Kim Sae-byuk and Kim Yae-eun, sold 606,000 tickets at 1,094 screens from Friday to Sunday.

The movie focuses on Yu’s (Ko) year spent in prison after organizing a demonstration against Japanese colonial rule in her hometown. 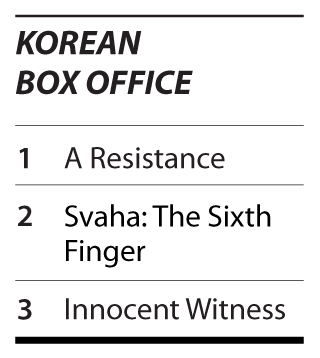 Although Yu is beaten and tortured by Japanese soldiers, she works to organize another rally in the prison to commemorate the first anniversary of the March 1 Independence Movement with other inmates.

Coming in at second was “Svaha: The Sixth Finger.” In its second week, the thriller sold 471,000 tickets at 955 screens.

The film has actor Lee Jung-jae play as Pastor Park, who carries out an investigation into a suspicious cult group called Deer Mount. He finds out that several members of the group have been carrying out murders in the name of God.

The film hit the two-million-ticket sales mark on Saturday, raking in more than 17 billion won as of Sunday.

Despite the number of new releases that hit theaters last week, “Innocent Witness” held on to the third spot, with 373,000 admissions sold at 974 screens over the weekend.

Starring Jung Woo-sung and Kim Hyang-gi, the heartwarming drama is about a lawyer (Jung) who persuades an autistic teenage witness (Kim) to prove a murder suspect.

According to Lotte Entertainment, the movie has been sold to nine countries around the world and will also be screened at the 43rd Hong Kong International Film Festival, which will be held from March 18 to April 1.

The comedy flick “Extreme Job” slid two spots in its sixth weekend but still remained strong, raking in a total of more than 137 billion won as of Sunday.

“Race to Freedom: Um Bok Dong,” another film celebrating the 100th anniversary of the March 1 Independence Movement, debuted at a disappointing fifth, selling 81,000 tickets at 587 screens over the weekend.

The movie tells the story of cyclist Um Bok-dong, who was able to beat many professional Japanese cyclists in races while Korea was under Japanese colonial rule.

The film, which has sold a total of 154,000 tickets since its debut on Wednesday, has a long way to go to reach its break-even point of four million tickets.

The film tells the story of a fake couple who arranges a fake marriage in order to satisfy their parents’ wishes.