Moon urges aides to prep for ties with North

Moon urges aides to prep for ties with North 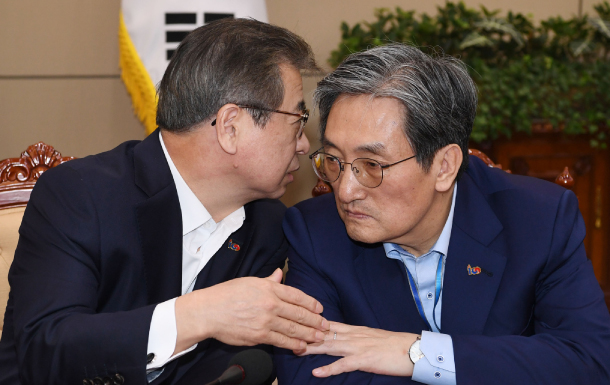 Suh Hoon, left, director of the National Intelligence Service, and Noh Young-min, right, the presidential chief of staff, talk in whispers on Monday before a plenary session of the National Security Office at the Blue House begins. [JOINT PRESS CORPS]

Moon also called on the Blue House and government to devise “short- and long-term visions” for carrying out his New Korean Peninsula Regime, indicating that his push to economically re-engage with Pyongyang will be unaffected by the breakdown in talks between North Korean leader Kim Jong-un and U.S. President Donald Trump.

Moon’s comments on Monday came during his first time presiding over a plenary session of the National Security Office in nine months. The last was on June 14 last year, a day after the first Kim-Trump summit in Singapore.

In the meeting at the Blue House, which was attended by his prime minister, secretaries, some ministers and the National Intelligence Security director, Moon spent the entirety of his opening remarks on the second summit between Kim and Trump and how Seoul can help overcome the impasse.

Blue House spokesman Kim Eui-kyeom later told reporters that, during the meeting and after Moon’s opening remarks, South Korea’s Foreign Minister Kang Kyung-wha said her ministry would come up with various ways to enhance talks between Washington and Pyongyang, such as pushing for a track 1.5 meeting of government officials and private-sector experts from South Korea, North Korea and the United States. Kang was quoted as saying it’s been proven “clear” from last week’s summit that the issue of contention between Pyongyang and Washington was that the United States wants the North to demolish its Yongbyon nuclear facility in addition to other measures in return for relief on some sanctions.

Unification Minister Cho Myoung-gyon told the National Security Council meeting that his ministry would prepare to discuss resuming two key inter-Korean economic projects with the United States. He took a cue from Moon’s national address last Friday that Seoul would consult with Washington on ways to resume tourism to Mount Kumgang and reopen the Kaesong Industrial Complex. The two projects, which are just above the inter-Korean border, were shut down by the past two conservative administrations of South Korea.

National Defense Minister Jeong Kyeong-doo vowed to hold a high-level military meeting with Pyongyang by the end of this month to carry out the agreements made on Sept. 19 last year in a South-North military pact.

In his opening remarks, Moon said it was sad that the second summit failed to bear fruit in Hanoi, but also stressed that it was an opportunity to see some “very significant achievements” made so far in North-U.S. discussions. The president then spent half of his opening speech trying to convince his aides that the summit didn’t end badly after all.

Moon lauded both sides for having talked about the complete demolition of North’s Yongbyon nuclear facility under the observation of American experts, saying the scrapping of Yongbyon would mark an “irreversible” step in North Korean denuclearization.

The fact that both sides discussed the easing of sanctions on the North was a “big step forward” compared to the first summit, said Moon, because it showed what reciprocal measures the United States was willing to give to the North in return for its substantial denuclearization measures. Moon, however, didn’t mention how the summit was cut short because Kim and Trump failed to find middle ground on this crucial issue.

Thirdly, Moon said, it was meaningful that the establishment of a U.S. liaison office in the North was brought up because the space would come in handy when a team of American experts later set foot on North Korean soil to observe Pyongyang’s demolition of its nuclear facilities, materials and weapons. On another positive note, Moon said Trump and Kim didn’t bash each other after the summit, but instead, highlighted their mutual trust and expressed a willingness to continue talks.

Moon said he looked forward to seeing Kim and Moon meet “at an early date” to strike a deal, adding that it was pertinent for Seoul to now look for ways to narrow the gap between the North and United States and help them resume working-level discussions.

The South Korean president urged his aides to carry out South-North cooperation initiatives that were agreed to last year by the two Koreas in the Panmunjom Declaration and Pyongyang Declaration, without naming any specific projects. He also asked them to map out his New Korean Peninsula Regime vision.

Last Friday, as he was addressing the public for the centennial of the March 1 Independence Movement, Moon referred to the New Korean Peninsula Regime as “a new community of economic cooperation” between the two Koreas to create a new order of peace and cooperation.