Park Sung-hyun is back on top

Park Sung-hyun is back on top 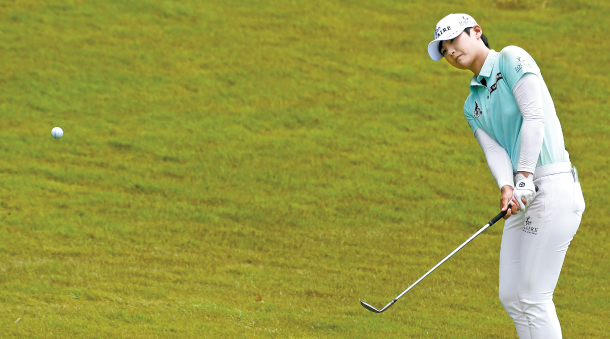 Park Sung-hyun hits a shot during the HSBC Women’s World Championship at Sentosa Golf Club in Singapore on Saturday. [AFP/YONHAP]

A victory in Singapore on Sunday not only allowed Park Sung-hyun to pick up her first win of the season but it also allowed her to reclaim the top spot in the world ranking.

In the latest Rolex women’s world ranking announced on Monday, Park now has 6.74 average points, .2 points ahead of former world No. 1 Ariya Jutanugarn of Thailand.

On Sunday, Park had an impressive come-from-behind victory at the HSBC Women’s World Championship at Sentosa Golf Club’s Tanjong course to pick up the sixth LPGA Tour win of her career. Park’s victory is a lot more impressive as she shot eight under par - 64 - on the final day to overcome a four-shot deficit over third-round leader Jutanugarn.

This is the third time Park reclaimed the top spot in the world ranking. She first reached the No. 1 spot in November 2017 when she was just a rookie. Although she only retained the top spot briefly, she became the first rookie on the LPGA Tour to reach the top spot since the ranking system was introduced in 2006.

Then, on Aug. 20, 2018, she reclaimed the top spot after winning the Indy Women in Tech Championship. After staying at No. 1 for about two months, Park slipped down the ranking and Jutanugarn moved back up.

But on Monday, Park once again reclaimed the top spot, bringing down Jutanugarn. As they are only .2 points apart from each other, the two golfers are expected to continue to vie for the top spot throughout the season.

Minjee Lee of Australia, who finished second on Sunday, retained her world ranking at third.

Along with Park, Ryu So-yeon, Park In-bee and Ko Jin-young were the other Korean golfers to be ranked in the top 10 in the latest world ranking. Ryu is the second highest ranked Korean golfer at fourth, while Park In-bee is fifth and Ko is eighth.

After a two-week break, the LPGA season will resume in Phoenix, Ariz., on March 21. In the meantime, Park will compete at the Country Club Ladies Invitational on the Ladies Philippine Golf Tour at the TCC Course in Laguna, the Philippines, starting today.