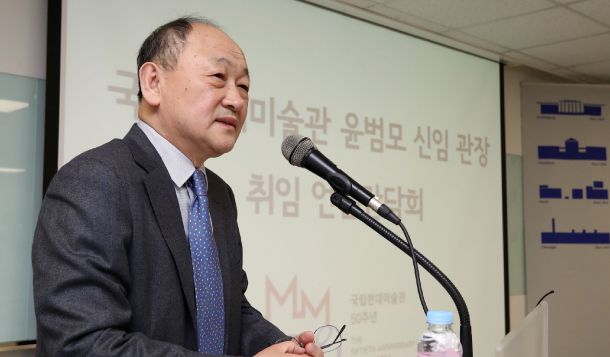 Youn Bummo, the new director of Korea’s National Museum of Modern and Contemporary Art (MMCA), explains the museum’s new goals during a press meeting at the MMCA Seoul Tuesday. [YONHAP]

Youn Bummo, 68, the new director of the National Museum of Modern and Contemporary Art (MMCA), confirmed he has no intention to relinquish the position, saying he will take the criticism about his appointment as “a lash for a better execution of the director’s work,” during a press meeting on Tuesday at MMCA Seoul. It was his first press conference since the Culture Ministry announced his appointment a month ago. Many art world insiders and journalists have criticized the pick, alleging that it resulted from a secret pre-arrangement.

Youn, a renowned art critic, had been one of the three finalists for the director’s position, but failed to pass a practical administrative ability test for high-ranking officials in December. The only candidate who passed the test was Lee Yong-woo, former president of the Gwangju Biennale Foundation. Yet the ministry didn’t pick Lee, instead letting the other two finalists take the second test, an unprecedented move. Both passed the test and the ministry appointed Youn to the position.

It aroused allegations that the government had preselected Youn because he has been an advocate of minjung art, or social realism art that prospered in the 1980s against the military regime, and an expert in North Korean art, which falls in accordance of the current administration’s culture policies. Lee released a statement deploring the unfairness of the procedure.

Asked by the press about it, Youn said, “[Lee] is a close friend of mine, so I’m sad. But I have nothing to say about it since I’m just an appointee.”

In the meeting, Youn unveiled several goals for the museum during his three-year term, including “active inter-Korean exchanges and cooperations in art for restoration of the fragmented Korean art history [due to the division of the Korean Peninsula]” and an “expansion of the Children’s Museum [in the MMCA Gwacheon in Gyeonggi].”

“I hope art will help us go toward peace and unification,” Youn said. Yet nothing concrete has been fixed, he added, as it depends on diplomatic situations.

Youn also repeatedly said the MMCA will help “establish the identity of Korean art through projects to set up the history of Korea modern and contemporary art.” Coincidentally, the Culture Ministry said last September, “The MMCA should focus on establishing the identity of Korean art,” when it decided not to renew the former director Bartomeu Mari’s term, although the first-ever foreign director of the national museum expressed his willingness to work for another term.

Asked how a conclusion about the identity of Korean art can come out in a few years and how the art history, which is supposed to be written by art historians from diverse perspectives, can be set up by a national institution, Youn explained, “Identity could sound strong. Then, I will say it is time to review the basis of Korean art and to unify the fragmental research projects about [Korean] art history.”