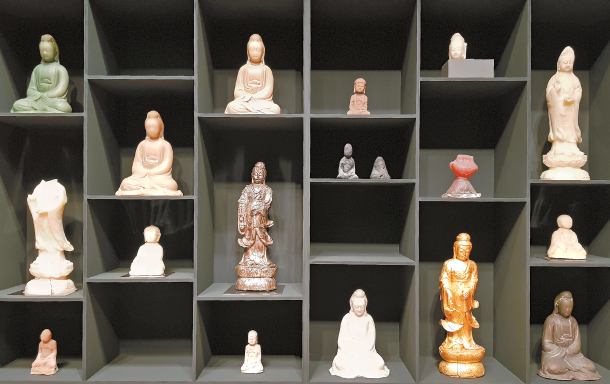 The exhibition of London-based Korean artist Meekyoung Shin at Wooyang Museum of Contemporary Art in Gyeongju, North Gyeongsang, includes a cabinet filled with East Asian Buddhist statues. They seem to have been weathered by time across hundreds of years. Yet they are actually made of soap and “weathered” by human touch. [MOON SO-YOUNG]

GYEONGJU, North Gyeongsang - It is a strange experience to see a group of Archaic Greek statues of young males in the nude at a contemporary art museum in Korea, especially in Gyeongju, North Gyeongsang, home to ancient Korean artifacts and ruins.

Yet they were actually created by a contemporary artist, Meekyoung Shin, under the title “Weathering Project: Kouros”(2009-). More surprisingly, all of them are made from soap. Some of them, which appear to be made from rusty bronze, were actually made from soap and then finished with oxidized copper. They are all part of Shin’s solo show “Ancient Future,” which runs until May 19 at Wooyang Museum of Contemporary Art, located near the Hilton Gyeongju.

The exhibition of the London-based Korean artist is an extended and enriched version of her solo show held last summer at Arko Art Center, central Seoul. The exhibition not only has the “Kouros” sculptures but also has groups of white porcelain and a cabinet filled with East Asian Buddhist statues.

The Buddhist statues seem to be made of jade, ivory or bronze and weathered by time for hundreds or even thousands of years. But actually, they were “weathered” over just a few months. In Shin’s “Toilet Project,” the soap sculptures were sent by the artist to restrooms in various museums to be used as soap. Then, being transformed by the museum visitors, they returned to the artist and were put on pedestals or shelves as “artifacts.” 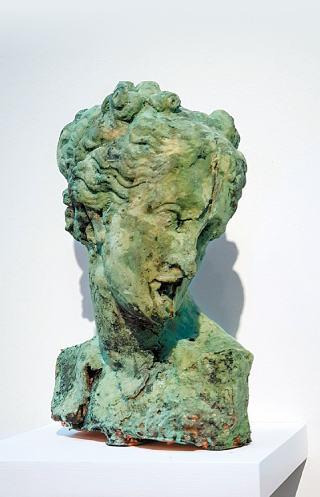 A sculpture made from soap and then finished with oxidized copper. [MOON SO-YOUNG]

Through this, Shin condenses and visualizes the flow of time that artifacts go through. She said during the exhibition at Arko last summer “I’m interested in the two phases of time that the artifacts in museums have gone through - the time when they were used as daily objects and the time since they were put in museums as relics.”

“The exhibition has its meaning enriched in the new context of Gyeongju, which was the capital of the ancient Silla Dynasty (B.C. 57-A.D. 935) and Buddhist culture for a millennium,” said Park Ji-hyang, chief curator of the museum.

“For example, when viewers who just saw Buddhist statues at Bulguk Temple see the Buddhist statues made of soap by Shin and ‘weathered’ by human touch, they get confused,” she said. “Then they come to deliberate why the artists did the work.”

The exhibition also contains the extended version of Shin’s new large-scale installation work “Ruinscape,” which she premiered at Arko last summer. It appears to be an excavation site of ancient temple ruins made of marble and alabaster, along with relics including broken sculptures and mummified bodies. They are also made of soap.

Assistant Curator of Asian Art at Solomon R. Guggenheim Museum in New York Kyung An wrote that through her works, Shin challenges the West’s system that distinguishes “artifacts” from mere objects under certain standards they set and arrange the artifacts and relics in museums in certain rules and ways to constitute a history.

“You know the past, history, is always reconstructed and rewritten in the present, so this exhibition is about the relation between the past, the present and the future, as its title ‘Ancient Future’ suggests,” Park said.

The exhibition runs through May 19. Admission is 5,000 won ($4.40) for adults. The museum is closed on Mondays. Take bus No. 700 at the Singyeongju Station KTX and get off at the Hilton Gyeongju stop.