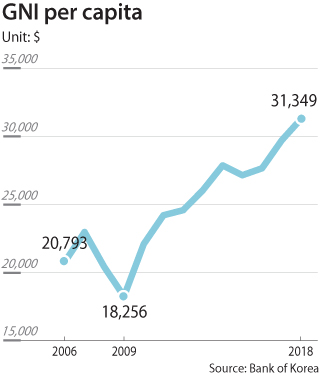 Despite crossing the important threshold - and forecasts placing the next important threshold just eight years out - concerns are already being voiced. Given the current state of the economy, it is not clear whether the country can hold this level, and, if it does, how fast it will advance.

Korea is the now one of approximately 30 countries and territories with per capita incomes above $30,000. Only six countries with populations above 50 million have a GNI per capita that exceeds $30,000 - the United States, France, Britain, Germany, Japan and Italy.

“While on average, these six countries went to $30,000 from $20,000 in 9.7 years, it took Korea much longer due to the global financial crisis,” said Shin Seung-cheol, an official at the central bank’s economic statistics department.

The central bank cited continuous growth and the devaluation of the Korean won against the U.S. dollar as reasons for last year’s breakthrough. Korea’s exports hit a major milestone last year when annual outbound shipments totaled $600 billion for the first time ever.

He also noted that the only countries that have been able to break $40,000 in GNI per capita and maintain that level are the United States and Germany.

“Our economy will be able to sustain growth only if it solves several structural problems that have been burdening our economy from advancing forward, including weakening consumption, job issues, the widening income gap and the high level of household debt,” said Shin said.

The biggest question for the economy is the weakening of the global market.

Last year’s 2.7 percent GDP growth was largely driven by government spending, which was up 5.6 percent in 2018. That was the sharpest increase in 11 years, when such spending grew 6.1 percent in 2007. Consumption in the private sector grew at its fastest pace in seven years, at 2.8 percent. The last time private-sector consumption rose that fast was in 2011, when it was up 2.9 percent.

Exports increased by 4 percent, the sharpest rise since 2013 when they grew by 4.3 percent. The situation recently turned as exports have been falling for the last three months.

Hyundai Research Institute estimates that if the Korean economy continues growing at an average of 2.5 percent, Korea’s GNI per capita could reach the $40,000 mark in 2027. However, the low fertility rate and the aging population are considered to be the biggest risks to growth and could endanger the climb to the next benchmark.