Prices up less than 1%, rise slowest in over 2 years

Prices up less than 1%, rise slowest in over 2 years

Inflation is at its lowest level in two and half years as the prices of crude oil and fresh produce declined, with consumer prices rising less than 1 percent for the second consecutive month. 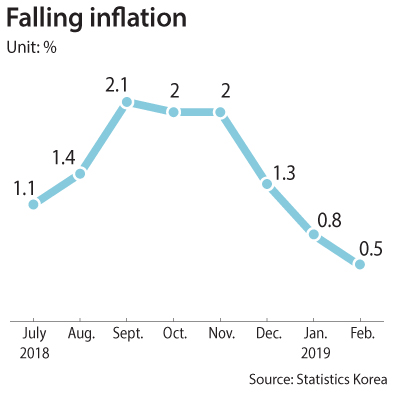 The price of cabbage, essential in the making of kimchi, plummeted, while taxi fares jumped.

According to Statistics Korea on Tuesday, consumer prices rose 0.5 percent in February from the same month the previous year. This is the lowest since August 2016, when consumer prices grew at the same rate.

Petroleum prices were down 14.2 percent, while diesel declined 8.9 percent. The price of liquefied petroleum gas for automobiles fell 9.9 percent.

Prices in this category fell 1.4 percent, taking 0.11 percentage points off of the price rise.

Vegetable prices were especially weak. The prices in this category were down 15.1 percent, reducing the inflation rate by 0.27 percentage points.

Many key staples are cheaper.

The statistics agency said that vegetable prices were down mainly because they were so expensive a year earlier, when prices spiked due to a cold snap.

Manufactured goods were also cheaper on average, with prices down 0.8 percent.

These falls were balanced by increases in the service sector.

The price of dining out increased 2.9 percent, contributing 0.36 percentage points to the rise. Taxi service prices were up 6.9 percent, the sharpest rise since June 2016, when the figure increased 7.8 percent. Last month, the taxi flagfall price in Seoul went up 26 percent