Keep your focus on Jus2, GOT7’s latest subunit: JB and Yugyeom wrote and composed an R&B-inspired album about the ‘six’ senses

Keep your focus on Jus2, GOT7’s latest subunit: JB and Yugyeom wrote and composed an R&B-inspired album about the ‘six’ senses 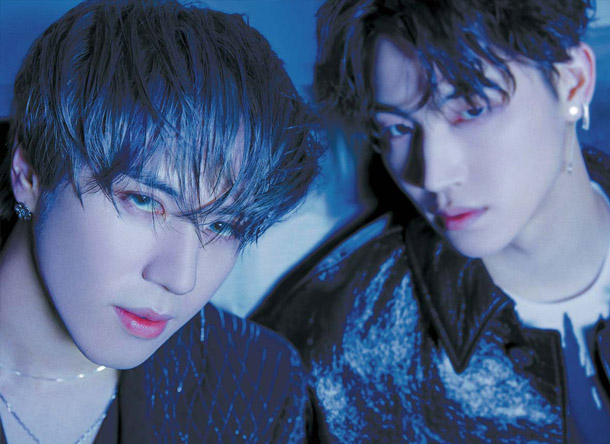 GOT7 members Yugyeom, left, and JB have come together to form a new subunit called Jus2. The duo’s new album, “Focus On Me,” was released Tuesday evening through music streaming services. The music video for their title track was released Monday and has been viewed over 12 million times as of Tuesday afternoon. [JYP ENTERTAINMENT]

All eyes are on Jus2, the new subunit of boy band GOT7, which made its official debut on Tuesday with its EP “Focus On Me.” The duo, composed of GOT7 members JB and Yugyeom, is the group’s second subunit to have a release, after JJ Project released “Bounce” in 2012. That duo includes GOT7 members JB and Jinyoung. This may be the second go around for JB - the group’s main vocalist - but he’s just as nervous and excited as Yugyeom is to introduce the duo under a new name.

“Focus On Me” has six tracks, all composed and written by the two. The titular R&B song was made by both JB and Yugyeom, while “Drunk on You,” “Touch” and “Senses” were written by JB. Yugyeom took part in producing and writing the lyrics for “Love Talk” and “Long Black.” The two have many different musical interests, but they found that they had more in common than they previously thought.

“I like diverse types of music, and we found that we both really liked R&B,” said Yugyeom.

“I think it was about [finding the common] mood, rather than a certain genre,” added JB. “The [title] track has a deep mood to it, which is not too strong or too bright - it’s very subtle. I think that was the common factor [of me and Yugyeom].”

The Korea JoongAng Daily met with the two members of Jus2 Monday, to talk about the release of their newest track. The following are edited excerpts from the interview.

Q. How does it feel having released a new EP on your own?

A. Yugyeom: I was so nervous, because this is my first time in a duo. But it felt so good when I heard that all [the tickets to the showcase] were sold out. We released the music video for the title track first, but we will play the rest of the songs at our showcase for the first time. I’m eager to find out how people will react.

JB: We both participated in the stage direction meetings for our group. And it’s come out a lot cooler than I thought, which makes me look forward [to the showcase] even more. We’ll even be going on a showcase tour soon. We’re out as a unit [of GOT7], but it also means that we’re doing our second debut as a unit. I felt so grateful for the opportunity to do so.

Could you tell us more about what the album is like?

JB: We focused on the idea of the human senses with the album. So “Focus On Me” is vision, “Drunk on You” is smell, “Touch” is touch, “Love Talk” is hearing, “Long Black” is taste and “Senses” is about our sixth sense. It’s different from the very strong and powerful sounds that we usually show with GOT7 - it’s a restrained sexiness.

How did the other members or Park Jin-young [the head of JYP Entertainment] react to the title track?

JB: I actually didn’t think that this song was going to be the lead track. I was surprised that the people from our company, especially Park Jin-young, liked the song. I do like the song, but I wasn’t expecting it to be liked so much. I’m really grateful, and also really relieved.

Yugyeom: We thought that [the title track] was going to be a different song, but it didn’t make the cut. We actually wrote like 20 songs. But there were clear guidelines for the album, and we chose the songs that best fit the theme.

What songs would you recommend other than “Focus On Me?”

JB: I would recommend “Senses.” It sounds like a song that you would hear in a lounge bar. The melody line and the whole mood are quite deep. I tried new things with these songs, so much so that I wasn’t sure if it was OK for me to be doing so.

Yugyeom: For me, it would be “Long Black.” It compares a lover to coffee, just like how it can be cold, hot, sweet or sour. I think it would be a good listen.

Why is the album titled “Focus On Me?”

Yugyeom: We want you to focus just on us. If you watch the music video, there’s a part where the focus goes off our faces and then returns when we turn around and face the camera. It’s a message that says, we want you to focus on us and nowhere else.

JB: I actually wanted it to be about senses, but it was rejected after a long series of meetings (laughs).

You mentioned earlier that you wanted it to have a restrained sexiness. How did you express that?

JB: We thought a lot about the styling. I first thought that see-through costumes or other clothes that had a little exposure would go well. But then we changed the way we thought, and went with a very formal look. I think the restraint came with showing less.

Do you feel that you’ve come far with GOT7?

Yugyeom: I’m actually not sure how famous or well-known GOT7 is. I think that we still have a lot to show to the public. I would like people to know both our name [as a group] and as individuals. I get a lot of support, and our songs do well. But I would like to achieve more, and so do the other members as well. I think that I have a desire to make myself known as a singer.

It’s been six years together as GOT7, and we’re still growing. The number of our album sales and the number of times we go on tour [are rising]. It’s been six years, but we still have a lot to change. We like that, and we want that. I used to think that gradual growth meant hardship, and that we weren’t doing well. But now that I think about it, I’m grateful that we still have room for development.

And do you feel like you’ve changed over the years?

JB: To be honest, I didn’t realize how precious each album and song was when I was younger. When we had an album, then we just had to practice that and get out there. It’s the similar process nowadays, too, but one day I thought, “Why am I just letting myself float like this? Shouldn’t I be trying harder?” That’s when I felt that I need to think more about the albums, and that they need to become the reason for my actions. I care so much about each and every album now - about how it’s made and the details in it. I think I learned how to cherish the things I’m doing.