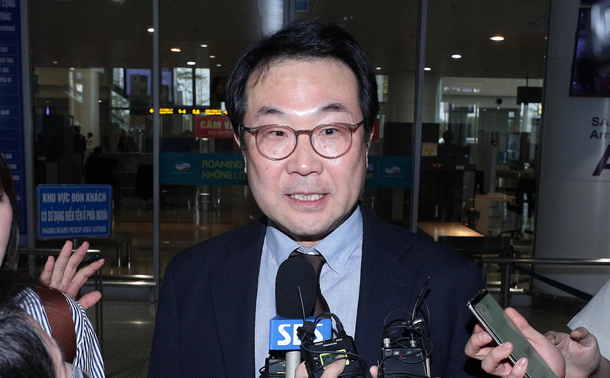 Lee Do-hoon, the South Korean Foreign Ministry’s special representative for Korean Peninsula peace and security affairs, is bombarded with questions by reporters ahead of the second U.S.-North Korea summit in Hanoi, Vietnam, on Feb. 28. [NEW1]

Around 4 p.m. on Feb. 28 at JW Marriott Hotel in Hanoi, Vietnam, reporters spotted a high-level Foreign Ministry official leaving the hotel following U.S. President Donald Trump’s news conference. A dozen reporters, as well as many cameras, chased him through the 100-meter-long (238-foot-long) corridor. In the end, he was surrounded by reporters.

Covered in sweat, he was asked, “What did you hear from Biegun?” “Why did the meeting break apart?” After about 10 minutes, he said he would explain later. It was Lee Do-hoon, special representative for Korean Peninsula peace and security affairs, who coordinated the Hanoi meeting with U.S. Special Representative for North Korea affairs Stephen Biegun.

A similar scene was spotted. After waiting several hours at the hotel lobby, the Japanese Foreign Ministry’s Kenji Kanasugi received a briefing from U.S. State Department officials and left around 5 p.m. One Japanese reporter chased him. On similar questions, such as “Did you meet Biegun?” he responded he could not answer and left through the lobby entrance. The atmosphere among the U.S. Department of State was different. On March 1, at the meeting hall of the Sofitel Legend Metropole Hanoi where Trump and North Korean leader Kim Jong-un had sat, 200 staff from the state department and the U.S. Embassy in Hanoi gathered for a party. They celebrated as if it had been a successful meeting.

After all — aside from Kim Jong-un himself — South Korea was the most shocked by the Hanoi summit’s breakdown. It was expected that dismantling Yongbyon nuclear facilities would be exchanged for an end-of-war declaration, the establishment of liaison offices or the lifting of sanctions on some inter-Korean cooperation projects, such as Mount Kumgang tourism. As the June 12 Singapore Joint Declaration mimicked the April 27 Panmunjom Declaration, Korea hoped the Sept. 19 Pyongyang Declaration between South Korean President Moon Jae-in and Kim would be repeated in Hanoi. South Korean diplomacy betted on this, as it could serve as a catalyst between North Korea and the United States. Yet the outcome betrayed the expectation: the meeting went in the opposite direction of the working-level negotiation in which North Korea came up with a proposal to dismantle only the Yongbyon nuclear compound. President Trump gave Kim a big deal document, demanding the dismantlement of all the North’s ballistic missiles and biochemical weapons, which was thoroughly prepared by John Bolton. He tested Kim’s genuine will for denuclearization rather than the details.

Here, North Korea’s tactics failed. President Moon Jae-in’s efforts for mediation through economic cooperation didn’t work. There is no reason for South Korea to be held accountable for the failure of the Hanoi meeting. Now that hope for any agreement between Washington and Pyongyang is broken, it is time to review and examine inter-Korean relations and the denuclearization strategy.