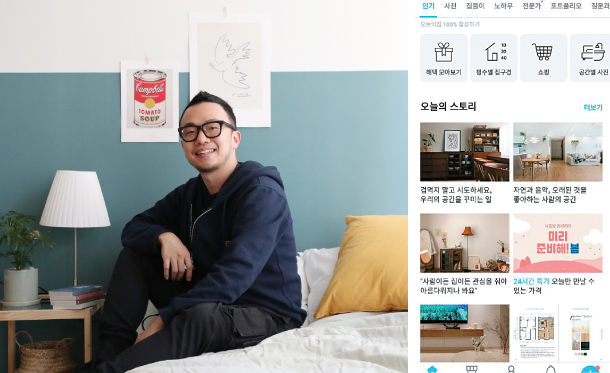 In the highly competitive businesses of fashion, beauty and lifestyle, some gamechangers have come along with unique approaches. What sets them apart? We take a look.

“Anyone can live in a pretty house.”

If you open the Today House app - which is run by Bucketplace CEO Lee Seung-jae - this is the first message you see.

It’s Lee’s hope for interior design and decorating novices to be able to fit out their houses as they like. It’s also a trend. Spaces - especially homes - are becoming more important to people.

Today House is a social media-based platform that allows users to tour interiors uploaded by other users and directly purchase products that appear in the photos. It was switched on in July 2014 and was chosen as the best app of 2018 by Google Play Korea at the end of last year.

Today House is growing at a tremendous pace. 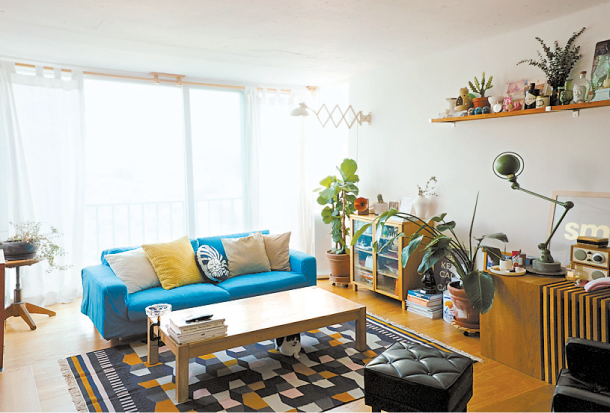 An image uploaded from the app shows a photograph shared by a user. If a viewer clicks on an item or a piece of furniture in the photo, they are sent to a page where they can buy the product. [BUCKETPLACE]

As of Feb. 10, cumulative downloads totaled 4.35 million, and the number of monthly users, including those from the website and Facebook, was averaging 2.8 million. Cumulative turnover has exceeded 100 billion won ($89.06 million). Since hitting 50 billion won in August last year, the total doubled within five months.

JoongAng Ilbo met CEO Lee at the Gangnam branch of WeWork in southern Seoul, where Bucketplace is located.

Lee majored in chemical and biological engineering at Seoul National University. Although he is only 32, Bucketplace is his second start-up. The first involved solar trash bins. But he ditched engineering for interior for an unscientific reason: He wants to live and work in a nice place.

He was inspired by the office of his previous company. The office was not that different from that of other companies, but compared to the cafe he worked at with his colleagues before, it was shabby and desolate. Besides, it was so different from the atmosphere of the cafes near Hongdae, western Seoul, where he first visited as a freshman. Then it hit him. He wanted to work in a space similar to a cafe.

But he could not hire professionals, so he just took the 10 million won budget for decoration and did it himself. It was his first time trying his hand at interior work.

“I was so dumbstruck that there was almost no information with regard to self-interior. From pulling together sources to finding the right place and products to buy, and even knowing the proper price, I was completely clueless. I thought for novices like me, it would be nice if there was a service that had all the information in relation to interior in one place. That is how Today House started.”

He experienced a sort of culture shock after visiting Hong Kong IKEA, which divides the products into categories: living room, bedroom and kitchen. When he visited the house of an acquaintance, he became determined to start his own business. There, he saw a kitchen with an Irish table and a living room with bikes.

“I always thought that the showroom of IKEA or the houses in the magazines cannot be owned by ordinary people, but after seeing that house, I changed my mind. I saw that it could be realized. I was also convinced that anyone would want to live in that kind of house. A service that offers a chance to live in a pretty house has ample possibility to grow. Although it might not succeed, I was sure that it would be meaningful.”

He established Bucketplace with two developers and one marketer. The goal was to develop a service that could transform a house at minimal cost. At first, the company focused on small items - like curtains and cushions - that can change the atmosphere, but they did not take on larger items.

It was not successful.

“The cost of styling the home was too expensive for customers, and experts could not earn enough profit. As a result, we decided to concentrate only on the customers and drastically change the direction of the platform.”

He reintroduced the service to allow people who want to show off their homes to do an online “housewarming.”

Today House created categories by home size and different types of spaces. It also added a reward system in which participants earn points based on the number of likes an uploaded photo receives. The app went viral and a total of 560,000 designs have been shared.

“When the cumulative number of members exceeded 500,000, I sold a small frame as a pilot project, and people liked it,” said Lee, who compiled content without any sales for two years.

The frames were the start. It turns out selling relatively small goods, like boxes, desk lamps and cushions, and targeting single-person households were the right formula. Now the company sells larger items like sofas, beds and mattresses.

But value for money remains a constant.

The company now has 70 employees. Last year, it expanded into construction. It acquired the rights of BratVillage, a start-up, and in doing so secured connections with 2,700 professional construction companies. The app added value by providing a cost-estimate calculator.

At the end of the interview, we asked about Lee’s house. With a blush, he said that he had never decorated his home because he does not have a home yet. He says he is so busy with work he stays in his relative’s house near his office.