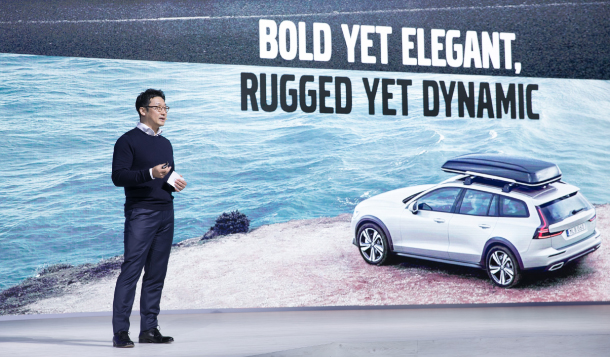 Volvo Car Korea is hoping to reach annual sales of 10,000 units this year for the first time by bolstering its Cross Country lineup with the new mid-sized V60.

At an unveiling of the V60 Cross Country model at Dongdaemun Design Plaza, central Seoul, Tuesday, the Korean unit of the Swedish company said it plans a 17-percent increase in annual sales this year with its Cross Country models, accounting for around 20 percent of the total.

“Through the Cross Country models, we plan to grow as a brand with annual sales of 10,000 vehicles,” said CEO of Volvo Car Korea Lee Yoon-mo. “I think that [Cross Country] could be a new segment that takes its place between sport-utility vehicles (SUV) and sedans.”

Volvo says Cross Country models offer the high ground clearance and load space of an SUV, while maintaining the comfort and driving ease of a sedan.

The automaker has seen rapid growth in Korea in recent years.

While the automaker recorded sales of just 1,960 units in 2013, that figure jumped to 8,524 units last year. Volvo’s Cross Country models, which include the V40, V60 and V90, took up nearly 13 percent of overall sales last year.

The company is hoping the new V60 will satisfy Korean customers looking for larger-sized vehicles. According to the Industry Ministry, the SUV segment of the local car market grew 4.5 percentage points last year from the previous year, while other segments mostly declined.

All trims of the V60 will come with an all-wheel drive system, the automaker’s smart safety system and a five-year or 100,000 kilometer (62,137 mile) warranty. Volvo said it is the only auto brand in the country to offer a five-year warranty as standard.

The automaker is hoping for sales of 1,000 for the V60 this year, and around 800 units have already been ordered.

The company addressed concerns about long waiting lists for other models, such as its small SUV XC40 due to supply problems.

“In order to grow around 20 percent this year, we are currently securing supplies from headquarters,” explained Lee. “For the XC40, there was explosive demand globally so there were problems in maintaining supply but other models won’t have a big problem.

“The pressure on supply could be resolved by around next year,” he added.