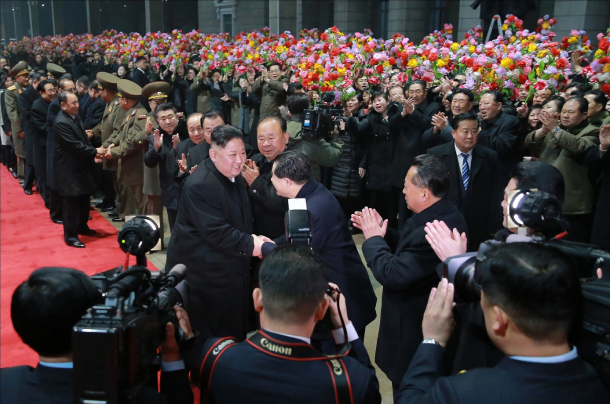 A photo released by the official North Korean Central News Agency Tuesday shows that Pyongyang citizens and officials welcome North Korean leader Kim Jong-un and his entourage upon his arrival home before dawn on Tuesday. [YONHAP]

North Korean leader Kim Jong-un returned to Pyongyang before dawn on Tuesday after he failed to reach a deal with U.S. President Donald Trump at their second summit in Hanoi, Vietnam, last week.

The North’s state media made no mention of the talks’ collapse or the lack of any agreement, instead hailing its leader for “successfully wrapping up his official goodwill visit to the Socialist Republic of Vietnam,” as reported by its leading newspaper, the Rodong Sinmun. The summit was mentioned only once, and was also called a success.

Kim’s armored train took a winding 60-hour return journey across China to return to the North on the same path it had taken to reach Hanoi last week.

No stop was made in Beijing - where the ruling Chinese Communist Party is holding its two annual legislative plenary sessions - suggesting that Kim and the North’s leadership are disappointed with the summit’s results and had no reason to consult Chinese President Xi Jinping on the talks with Trump.

According to a source familiar with the events, Kim did, however, stop briefly in the Chinese city of Dandong - just across the Yalu River from North Korea - and had a half hour meeting with Chinese officials.

While Pyongyang’s spin on the trip in its domestic reporting was typically adulatory, a Radio Free Asia report from Monday said that word of the summit’s collapse is quickly spreading around North Korea via word of mouth.

The report quoted a source in North Pyongan Province who said many of the North’s citizens were confused as to why Trump rejected the North Korean offer to dismantle the nuclear facilities at Yongbyon, despite the fact that Kim took a four-day train trip to Vietnam to make the deal.

Officials have doubled down to prevent further circulation of the news, the report continued, amid growing public fears that economic sanctions on North Korea could increase after the summit’s failure.

“But the news of the summit’s failure and the continuation of economic sanctions is intricately tied to the people’s livelihoods, so a crackdown on authorities will not be able to shut the ears and mouths of the people,” the source was quoted as saying.

Kim’s immediate return home on Tuesday without a stopover in Beijing could be aimed at increasing morale among the country’s elite and planning a way forward past the setback.

While Kim was greeted, as usual, by a cheering crowd waving flags and lines of state officials waiting to shake his hand, analysts say his return to Pyongyang at 3 a.m. could be meant to stress his hard work.

“Instead of focusing on the inadequate results of the summit, [the North’s propaganda] is putting the attention on how Kim rode a train night and day for the sake of the people,” said Jeon Hyun-jun, vice chairman of the Korea Peace Forum, a South Korean civic group made up of former government officials and academics.

Analysts also say another summit with Xi is nonetheless coming very soon. It may possibly be held within the month, after the end of the plenary sessions in Beijing, as the Chinese lent their railway network to Kim so he could make his way to Vietnam for the summit.