Secret enrichment plant is right next to Yongbyon: Sources

Secret enrichment plant is right next to Yongbyon: Sources 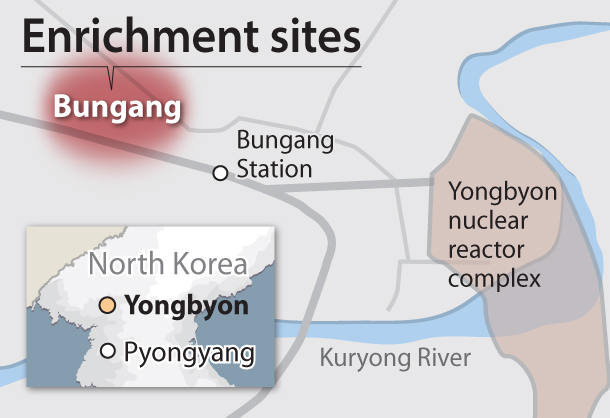 In a post-summit press conference, Trump said the United States knew about “every inch” of North Korea and that at the summit he “brought many, many points up that [he] think[s the North Koreans] were surprised that we knew,” in reference to U.S. demands for denuclearization measures from Pyongyang that went beyond dismantling the nuclear complex at Yongbyon.

Ri Yong-ho, the North’s foreign minister who took part in the closed-door discussions at the summit, also confirmed the Americans had demanded “one more measure” in addition to scrapping the Yongbyon facilities which they could not accept.

Disagreement on demolishing a second plant is believed to have been a crucial sticking point in Hanoi that ultimately resulted in Trump walking out without signing a much anticipated deal with North Korean leader Kim Jong-un last Thursday.

According to sources, the additional site flagged by the United States is the previously unreported underground facilities just west of Bungang Station, located in the same county as the well-known Yongbyon nuclear complex in North Pyongan Province.

“The Bungang complex is situated just northeast of the existing Yongbyon complex,” one source said. “The North Koreans appear to have built an underground highly enriched uranium factory there to prevent detection from abroad.”

The sources attest that the United States assumed Bungang would be included in the North Koreans’ promise to dismantle the Yongbyon complex, as it is just adjacent to the sprawling enrichment facilities there.

But the North, apparently surprised at the United States’ knowledge of the site if Trump was to be taken at his word, did not accept Bungang as part of that deal, given that it is technically separate from Yongbyon despite being only a few kilometers away. The episode evidently demonstrates that the United States and North Korea have different views about the scope of the Yongbyon complex.

The sources added that the facilities at Bungang are much bigger than those the North Koreans showed Dr. Siegfried Hecker - a Stanford professor and former director of the Los Alamos weapons laboratory in New Mexico - during his visit to the Yongbyon site in 2010.

Hecker, one of the leading experts on North Korea’s nuclear program who visited Yongbyon four times, estimated that around 2,000 centrifuges - through which uranium is enriched - were in operation at the complex, where fissile material for all six of its nuclear weapon tests from 2006 to 2017 are believed to have been produced. In comparison, intelligence officials in South Korea and the United States estimate that the nearby Bungang complex could be housing over 10,000 centrifuges.

Unlike plutonium, which requires a reactor and other reprocessing facilities like those located in Yongbyon, reprocessing uranium can be done more covertly in smaller spaces using centrifuges. “The [facilities at Bungang] are older than those seen by Dr. Hecker,” one source said, “but it appears U.S. intelligence officials have been slow to identify them due to their covert location underground.”

The only other public mention of Bungang dates back to a 2010 article by the South Korean local daily Dong-A Ilbo published shortly after Hecker’s visit to Yongbyon that raised the possibility the North was covertly operating another reprocessing center underneath a nearby mountain in Sowi-ri - in a place the North calls the Bungang laborers’ district. Intelligence agencies in South Korea and the United States in 2008 had already identified Sowui-ri as a possible uranium enrichment plant, the report read.

Officials in South Korea on Tuesday, however, appeared to have stepped back from the JoongAng Ilbo’s exclusive report on Bungang. Seoul’s Defense Ministry said Bungang merely referred to another area of Yongbyon County separate from where key nuclear facilities were located, implying it did not contain a covert plant.

The head of Seoul’s spy agency, Suh Hoon, said at a closed-door briefing to legislators that South Korean and U.S. intelligence officials were “looking into” any further nuclear related facilities in North Korea in detail, but added the 5 MW reactor at Yongbyon had been inactive since the end of last year and no further reprocessing activities appeared to be taking place.

The Washington Post and the BBC mentioned a suspected secret enrichment plant located in Kangson, which nuclear experts like David Albright at the Institute for Science and International Security said may be continuing nuclear enrichment even as Pyongyang’s negotiators engaged in talks with Washington.

38 North, the North Korean analysis website at the Stimson Center, cast doubt on this theory, saying that Kangson lacked security details and was too close to a major highway to serve as a covert enrichment facility.

Sites suspect of ballistic missile development like Sakkanmol in North Hwanghae Province - one of 13 undeclared missile operating bases in North Korea identified by the Washington-based Center for Strategic and International Studies last year - were also seen as possible candidates.