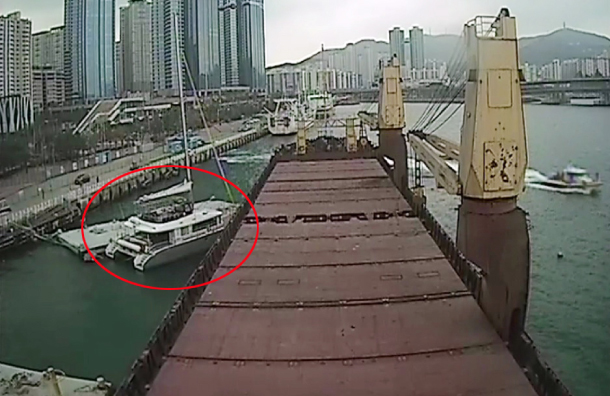 This photo, provided by Busan Metropolitan Police Agency, shows a Russian freighter hitting a yacht before bumping into Gwangan Bridge in Busan on Feb. 28. [YONHAP]

A drunken Russian skipper’s misjudgment and improper steering caused his ship to crash into a bridge off the coast of the South Korean port city of Busan last week, the Korean Coast Guard said Tuesday.

On Thursday, the 5,998-ton Russian freighter Seagrand bumped into the side of Gwangan Bridge, damaging the lower part of the bridge. Before the accident, the ship also damaged three yachts and injured three sailors on board.

The coast guard immediately nabbed the vessel and questioned the crew aboard. It later detained the ship’s 43-year-old Russian captain, whose identity is being withheld, on charges of operating the vessel while under the influence of alcohol. According to the coast guard, the captain had a blood alcohol level of 0.086 percent, well above the legal limit of 0.03 percent and high enough revoke his captain’s license. But the captain claimed that he drank after the accident took place.

“It has been found that Seagrand’s crash, into the three anchored yachts and Gwangan Bridge, was caused by improper steering due to misjudgment while under the influence of alcohol,” the coast guard said in announcing the interim outcome of its probe.

The skipper could have prevented the accident if he had steered the ship into its portside at a low speed after colliding with the yachts, but he steered it to the starboard side at a high speed, making the ship’s rotation radius bigger and eventually bumping into the bridge, the coast guard explained. The ship’s voyage data recorder and CCTV footage in its wheelhouse, released by the coast guard, shows the captain disoriented and out of control right before the ship crashed.