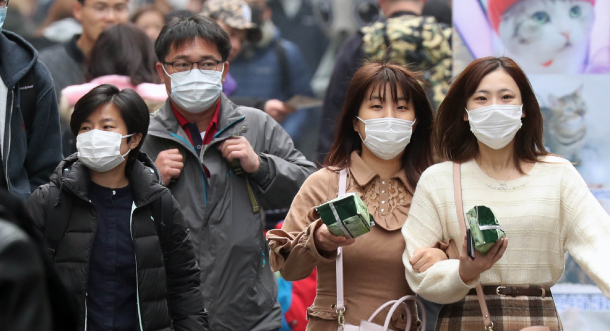 Shoppers, wearing masks to ward off fine dust, walk in the bustling Myeong-dong District, central Seoul, on Tuesday as air quality gets worse due to an increasing level of fine dust. [KANG JUNG-HYUN]

The fine-dust problem has become so bad that even pristine Jeju Island has had its reputation sullied. On Tuesday, a dangerously high level of fine gunk descended on the island, masking views of Mount Halla.

“I moved to the island five years ago because I love Mount Halla, which I can see from any point on the island,” exclaimed Jeong Seong-cheon, a 55-year-old resident of Jeju City. “But not this morning! It’s sad to think the island is no longer safe from fine dust.”

Other parts of Korea have been suffering for days. In Seoul, the level of PM2.5 fine dust hit 150 micrograms at 11 a.m. Tuesday, twice the level of what health authorities in Korea designate as very unhealthy.

As of press time Tuesday, the daily average of PM2.5 in Seoul was close to breaking the record for the city, which was 129 micrograms on Jan. 14, the highest since 2015 when data was first recorded. The average PM2.5 level in Seoul hit 144 micrograms at 5 p.m. 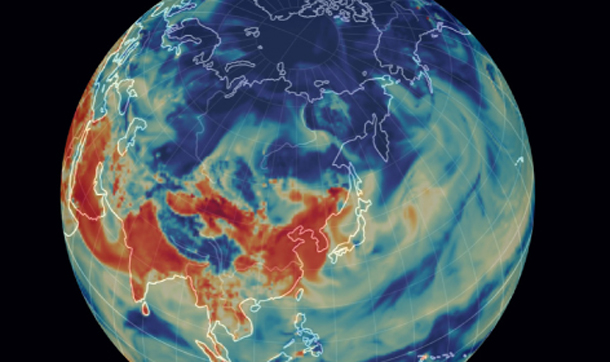 A map provided by earth.nullschool.net shows a distribution chart of ultra fine dust (in red) over China and the Korean Peninsula early Tuesday morning. [NEWS1]

The Jeju provincial government issued an emergency fine-dust reduction measure for the first time ever on Tuesday. Other local governments in Korea have been issuing fine-dust reduction measures, which involve taking cars off the road, especially old diesel-fueled vehicles, and temporarily halting operations of local coal power plants when unhealthy levels of fine dust are expected to be prolonged.

The Ministry of Environment on Tuesday also issued severe fine-dust alerts for Gangwon, North Chungcheong, Gyeonggi, Sejong and Seoul, which is issued when a PM2.5 level of 150 micrograms or more is expected in an area for more than two hours.

Korea’s National Institute of Environmental Research (NIER), a think tank run by the Ministry of Environment, said the very unhealthy level of fine dust is expected to remain over the Peninsula through today.

“The air is staying stagnant over the country, while more fine-dust particles are flying in from beyond its borders,” the NIER said in a forecast Tuesday afternoon. “The dust level is expected to stay high through all regions of Korea.”

Although Korea has seen rising levels of fine dust for several years, this year and last have been the worst. According to a report by Air Visual, an international organization that tracks air quality throughout the world using government data, on-site devices, weather reports and satellite data, South Korea had the worst level of PM2.5 among OECD nations second only to Chile in 2018.

According to Air Visual, the average PM2.5 level in South Korea through 2018 was 24 micrograms per cubic meter of air. Japan’s level was half of that at 12 micrograms. In China, it was 41.2 micrograms.

“Coal burning remains a significant contributor to regional air pollution, with high levels of coal production and consumption in China mainland and Mongolia in particular,” Air Visual said in its report. “Transboundary pollution is also a concern for neighboring areas such as Hong Kong, Taiwan and South Korea, including both emissions from human activity as well as seasonal dust storms which can affect much of the region.”

Some experts said climate change has a lot to do with the worsening air quality in the region. “The rising fine-dust level in the area has to do with how air in the atmosphere has increasingly stayed stagnant as an effect of climate change,” said Woo Jung-hun, a professor of geoscience and engineering at Konkuk University. “The mix of imported emissions and domestically-produced emissions over the region stays stagnant and thickens over time, resulting in what we see these days. So policies reducing greenhouse gas emissions need to go hand-in-hand with solutions to tackle the fine-dust problem.”

Opposition leaders in Korea called on President Moon Jae-in Tuesday to meet with China’s President Xi Jinping to do something about the worsening air pollution. Many Koreans believe the air pollution is due to emissions from Chinese factories.

“A Korea-China summit meeting to focus on tackling the fine-dust problem needs to take place immediately,” said main opposition Liberty Korea Party (LKP) floor leader Na Kyung-won, in a party meeting on Tuesday. “People have been demanding this for a while but to no direct response from the Moon government.”

“The government may not even know what to do because it does not understand which policies are going wrong,” said Hwang Kyo-ahn, former prime minister and chairman of the LKP. “We’ve been saying over and over that one of the policies it needs is to reverse the phasing out of nuclear power plants.”

Members of the Democratic Party responded to this argument by stating that the administration, in the long term, intends to reduce both the number of coal and nuclear power plants.