Gov’t vows more funds to get start-ups to thrive

Gov’t vows more funds to get start-ups to thrive 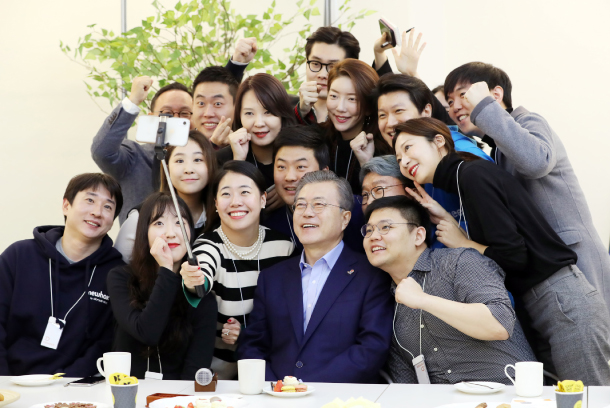 The government will be creating a 12 trillion won ($10 billion) investment fund on top of investing 17.7 trillion won in new start-ups over the next four years in the hopes of creating an innovation boom for Korea.

It wants to create 20 unicorn companies - start-ups whose values exceed $1 billion - by 2022, up from Korea’s current six.

“Between 1997 and 2000, we enjoyed the first start-up boom, and through that process, we were able to grow as a major IT country,” President Moon Jae-in said in meeting with six start-up chief executives and investment representatives at D.Camp, an ICT incubator campus in Yeoksam-dong, southern Seoul, on Wednesday.

“Now we need to create a second start-up boom where we’re not only supporting innovative start-ups but also providing support so they can grow and help the country become a leading global start-up nation and make these technologies new growth engines.”

The event was a follow-up to Moon’s meeting with first generation start-up celebrities a month ago at the Blue House, including Naver founder Lee Hae-jin, NCSoft founder and CEO Kim Taek-jin and CEOs of unicorn companies like e-commerce company Coupang CEO Kim Bom.

“Despite our efforts, there have been limits to our start-ups growing into global companies and enjoying exceptional growth to become unicorn companies,” Moon said.

In the era of the so-called fourth industrial revolution, when convergence of different technologies and speed, innovation and unrelenting challenges are important, Moon said start-ups will determine a nation’s industrial development and the economic growth and play a central role in a country’s competitiveness.

He said that, as of 2017, there were already 572 start-ups whose annual revenues exceeded 100 billion won. Total revenues of these companies amounted to 225 trillion won, he said. 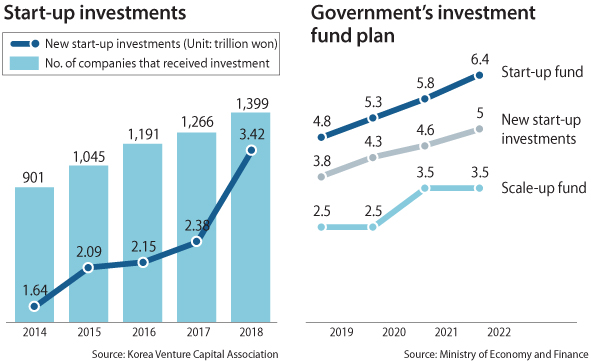 “Additionally there are 760,000 people that work in such companies, which exceeds the total number of people employed by the top five conglomerates in Korea,” Moon said. “This proves that it is a new growth engine and an area that creates jobs.

“Already the world is fiercely competing in innovative start-ups and these start-ups are changing the world economy,” Moon continued. “China, which came to Korea to learn from our start-up ecosystem, has turned into an innovative country that is shoulder-to-shoulder with the United States by fostering major innovative companies like Baidu, Alibaba and Tencent.”

However, Moon noted the difficulties these start-ups have in scaling up on their own.

“The government will dedicate 12 trillion won over the next four years to create a fund that will support the scaling-up of these companies, and with it we will have the foundation for these start-ups to become unicorn companies,” Moon said.

The government also plans on creating a fund amounting to 22.3 trillion won by 2022, of which 4.8 trillion won will be invested this year alone.

The government will also be working on supporting the mergers and acquisitions market so that competitive start-ups can expand.

“The government will create an environment so that start-ups and investors can make profits, which could be reinvested,” Moon said. “The investment recovered through mergers and acquisitions will be raised from 2.5 percent in 2018 to more than 10 percent in 2022.”

He said in order to encourage conglomerates to actively invest in start-ups through mergers and acquisitions, the government will work on improving the start-up holding company system while providing incentives to conglomerates that encourage its employees to create their own start-ups within a company or help them spin off.

The fair trade law will be changed so that start-up holdings companies will be approved with total assets of 30 billion won, lowered from the current 500 billion won.

Additionally, the stake that a holdings company should have in its unlisted affiliate will be reduced from the current 40 percent to 20 percent. If these regulations are changed, a conglomerate is expected to be able to own as many as 15 start-ups as affiliates.

At the meeting, some raised the need for local venture capitalists to be bolder in their investments.

“It is not easy in preparing the necessary finances for growing solely with government support,” said Seo Kyoung-mi, Linkshops CEO. “Venture capitalists should be bold in their investments just by finding the potential of growing companies.”

“[However,] the largest venture capital in Korea is 300 billion won and many are smaller than 100 billion won,” Lee said. “On average, they are 30 billion won.”

Mashup Angels is a company that specializes in investing in ICT start-ups.

Some at the meeting raised the need for regulatory changes.

Late last year, there were growing complaints about taxi drivers blocking the launch of a carpooling service from the IT company Kakao.

This situation led to a heated debate over conventional industries blocking the introduction of new businesses.

“[While] this administration’s attempt in breaking through [the current situation] with the introduction of a so-called regulatory sandbox is a good direction,” said Ahn, “in order to counter the fourth industrial revolution paradigm, it is important to look [deeply] into the fundamental and structural problems of regulations.”