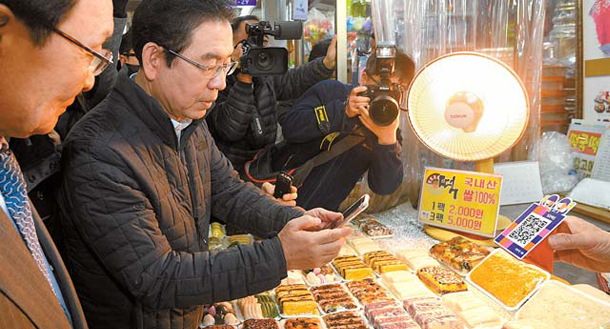 A government-backed mobile payment system failed to live up to expectations in its initial stage despite the efforts to boost its popularity with tax benefits.

The number of transactions processed through Zero Pay, the payment method, stood at 8,633 worth 194 million won ($171,900) in January, according to the Financial Supervisory Service, which released the data at the request of Rep. Kim Jong-seok of the opposition Liberty Korea Party.

The latest reading accounts for 0.0003 percent of payments made through plastic credit cards, the payment method that Zero Pay vowed to overtake.

Given that the number of affiliated retail stores totals 46,628 as of the end of January, the monthly number of Zero Pay uses per store stood at 0.19 or 4,278 won.

Launched in December of last year, the system is built into the apps of partnered banks and payment platforms and uses a QR scanning method.

Consumers can scan a vendor’s QR code with their smartphone to make a payment.

The Ministry of SMEs and Startups spearheaded the project in a bid to lower commission fees charged on mom-and-pop store owners in cooperation with different city governments including that of Seoul.

But neither merchants nor customers were particularly keen on adopting the system.

The partnered stores make up less than 10 percent of Seoul shops owned by independent businessmen, which means consumers would often face difficulties finding a place to use Zero Pay.

The problem is that credit card fees have also been reduced, backed by government pressure on card issuers and different tax benefits for smaller merchants.

When factoring in those benefits, merchants with less than 1 billion won in sales already get a lower rate, between 0.1 percent and 0.4 percent.

But the problem is that not many people are aware the incentive exists.

“I just heard of the name, Zero Pay, because I saw banners promoting it on the street,” said Kim Ha-jin, a 28 year-old office worker in Seoul.

“But I have no idea what I can get from it,” she said.

Rep. Kim said that it is crucial to alert users of the incentives.

“Zero Pay should put not focus on partnered stores, but keep working on providing relevant benefits to consumers.”