KWON HYUNK-JOO
The author is an editorial writer of the JoongAng Ilbo. 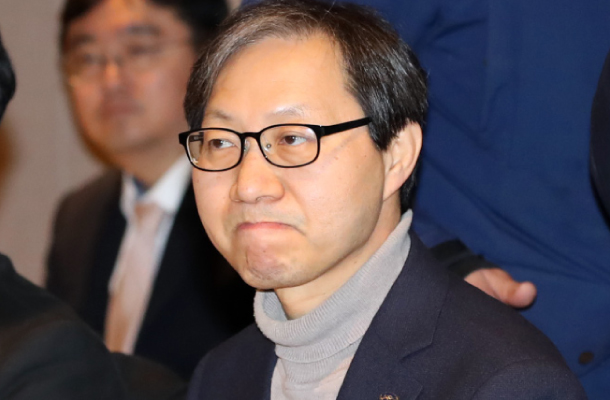 Chairman and CEO of the National Pension Service (NPS) Kim Sung-joo attends a fund management meeting on Jan. 16. The NPS plans to exercise its rights as a major shareholder of the Hanjin Group. [YONHAP]

Novices and average people alike are curious about masters’ secrets, especially in the world of investment. Success stories revolving around real estate and stock investments often become best sellers. The first edition of the Warren Buffett Way, published in 1994, sold more than one million copies. In it, writer Robert Hagstrom compiles Buffett’s strategy.

Investment specialists also closely watch what super-investors do, and they emulate. As a result, money flows to where super-investors go. Mark Mobius, the former chairman of the Templeton Emerging Markets Group, was dubbed the “Pied Piper” — just as the Pied Piper lured rats, investment funds followed Mobius.

In the 2010s, individual investors in Korea followed the National Pension Service (NPS). They closely watched to see whether the NPS would buy bio stocks or IT stocks. The NPS enjoyed 58.3 percent returns in 2009 and 24.3 percent in 2010. Yet these are past memories: the NPS’ report card is now quite disappointing. Last year, the national pension fund lost 16.9 percent in domestic stock investments. According to the NPS Investment Management, returns were 1.3 percent lower than index returns. In other words, you would have made more than the NPS simply by buying all listed stocks in the ratio of market capitalization. The NPS’ performance last year was a failure
Now, the NPS is being given the weapon of the stewardship code. The justification for this is the enhancement of long-term earnings for citizens’ retirement, and the goal is to actively exercise shareholder rights to improve companies’ values. The NPS announced it would use its powers at Hanjin KAL and Namyang Dairy Products shareholder meetings. Yet something doesn’t feel right. The NPS, which has been struggling with its own investments, wants to advise companies. It’s like a struggling student tutoring friends.

Of course, it may work for companies with serious problems. But I worry the NPS wants to use the code actively. Wouldn’t it be better to improve its investment skills first and prove itself through performance? That would be in line with the NPS’ original purpose.