Rollable rollout set for second half, but no price set

Rollable rollout set for second half, but no price set 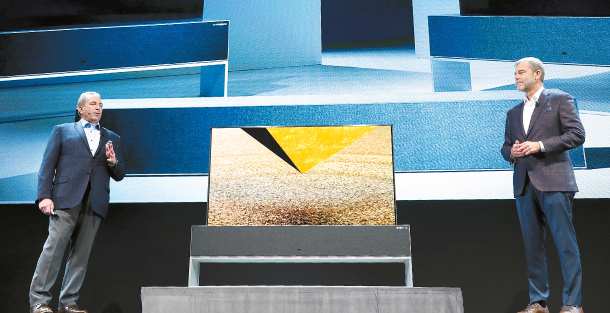 The world’s first rollable TV will hit the market in the second half of the year, and it is being debuted in Korea. But the price has yet to be determined.

The LG Signature OLED TV R, which was recognized as the Best TV at the Consumer Electronics Show in January, rolls into a storage box that becomes a table with speakers.

“We are currently in the stage of selecting the countries where we will introduce rollable OLED TVs,” said LG Electronics President Brian Kwon at a press event held in Magok-dong, western Seoul, Wednesday. “We are thinking of developed countries like Korea, United States and Europe in the early phase. The premium television market has shown a rapid rise centering on these countries. But we are also planning to raise the premium TV’s market share in Central America and Asia.”

Kwon couldn’t offer much guidance on price. “We are currently negotiating and trying to settle the final price with retailers.”

Utilizing nano cell technology, the LG Super Ultra HD TV can be viewed at any angle without a loss of color quality. 8K OLED TVs use 33 million pixels, according to LG.

The company said that the new premium TVs feature artificial intelligence (AI), while the second-generation Alpha-9 processor, which was introduced in late 2018, and a deep-learning algorithm are utilized.

This means that OLED TVs released this year will automatically optimize images and sound based on the environment. It will learn from experience and acquire skills, the company claimed.

The AI Home Board will be embedded in premium TVs.

With it, viewers will be able to check the status of other devices, like robotic vacuum cleaners and air purifiers, on the screen and control them by voice or remote control.

Kwon is vigilantly battling Samsung and stressed the distinction between its OLED TVs and Samsung’s QLED TVs.

“Basically, the difference between OLED and QLED is like comparing the LCD and OLED TVs. LCD TVs create the display using a backlight while OLED TVs are able to light up the screen using pixels. This allows OLED TVs to render true black whereas [LCD TVs] can’t. Basically, the structures that generate the image quality are different.”

LG expects the global OLED TV market to grow by almost threefold over the next three years from 3.6 million units this year to more than 10 million units by 2021.

“The OLED TV market has grown rapidly since 2015. Last year, sales of OLED TVs accounted for more than 20 percent of [LG’s] entire TV sales, and we hope to accelerate its growth this year for it to take up 25 percent of our TV sales,” Kwon explained.

“For a TV manufacturer to survive in the long-term, we believe it’s essential to focus on the premium TV market, and we are planning to [develop our TV business] based on OLED TVs.