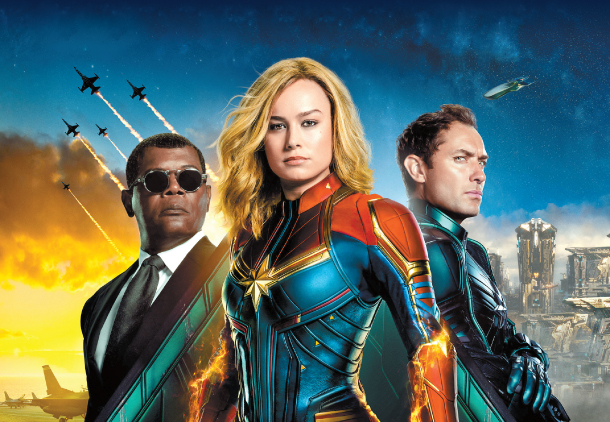 What distinguishes Marvel’s action-packed films from others is their in-depth character development and the compelling, rich narratives that take viewers on a ride through the Marvel Cinematic Universe (MCU). The highly-anticipated “Captain Marvel,” released on Wednesday, continues that tradition and pushes it even further as the studio’s first blockbuster centering on a female superhero.

Those who saw the latest “Avengers” film last year have been waiting for Captain Marvel’s arrival - the movie hinted that she would be the Marvel Universe’s only hope against the supervillain Thanos. Before “Avengers: End Game” releases in April, “Captain Marvel” is a must-watch to understand why this superhero is a key figure in the MCU.

Directed by Anna Boden and Ryan Fleck, the movie kicks off with Carol Danvers (Brie Larson), a half-human and half-Kree warrior, working for the Kree Starforce under the name Vers.

The Kree are currently engaged in a long-time galactic war with another alien race, the Skrulls, who have the power to camouflage themselves as any creature they wish.

Danvers, however, has no memory of her past after being involved in an accidental “explosion” while trying to save her colleague, Mar-vell.

During a fight against the Skrulls on a mission to search for a powerful energy force, Danvers gets separated from her team and lands on Earth. There, she finds out that a Skrull is hiding somewhere on Earth and thus embarks on a quest to capture the Skrull. In the process, she teams up with Nick Fury (Samuel L. Jackson), an agent of the S.H.I.E.L.D. team.

Yet as Danvers slowly unravels the truth about her past, she begins to doubt the very purpose of the whole war and her identity as a Kree warrior.

Carol Danvers, who later becomes Captain Marvel, works as a Kree Starforce warrior amid a heightened war between two alien races - the Kree and the Skrulls. [THE WALT DISNEY COMPANY KOREA]

Although the movie follows the typical narrative of a superhero story, the heroine stands out and is a refreshing addition to the genre. The movie centers around Danvers’ journey of self-discovery, moving around space and Earth. From beginning to end, Danvers is strong-minded, brave and, at certain times, unable to control her temper. Part of her disciplined character comes from her past, when she worked for the U.S. Air Force. But she enjoys her powerful abilities, and viewers come to understand that she is heavily influenced by her past.

The action scenes in the film are a grand spectacle, starting with Danvers’ taking on the Skrulls and ending with her fighting against spacecrafts attempting to invade Earth. Those unfamiliar with the MCU may be reluctant to watch the movie, but unlike “Avengers: Infinity War,” “Captain Marvel” sufficiently explains the background of the whole conflict that takes place between characters.

Despite criticism surrounding Larson’s allegedly “man-hating” comments before the movie’s release, the film managed to easily top the Korean box office. Some people called Larson out for a tweet she posted in 2017 alleging harassment. The tweet read, “I merely smiled at a TSA agent and he asked for my phone number. To live life as a woman is to live life on the defense.” Some responded to the tweet, saying that she was overreacting.

She was also criticized after she uploaded a picture of herself holding a drink, with the caption saying, “Thinking about Stan. What a legend. R.I.P” following the death of Stan Lee. People argued that it was inappropriate and had nothing to do with commemorating Lee.

Still, the movie managed to sell more than 450,000 tickets in advance of its release on Wednesday.