Young broker will do anything for ‘Money’

Young broker will do anything for ‘Money’ 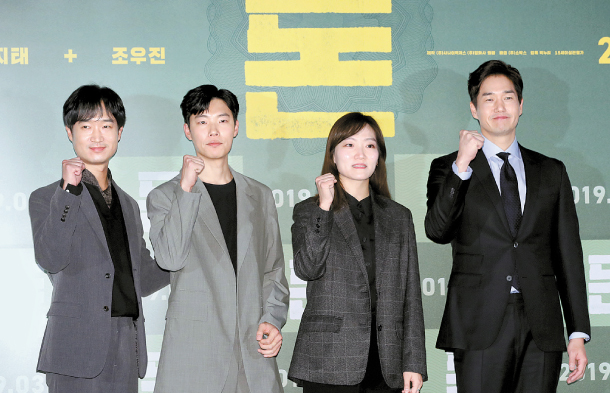 Many people dream of becoming filthy rich, but only few get the chance to be so. Nevertheless, rookie stock broker Jo Il-hyeon would do anything he can to become rich. That’s the reason he became a stock broker in the first place.

In the upcoming film, titled “Money,” starring actors Ryu Jun-yeol, Yoo Ji-tae and Jo Woo-jin, director Park Nu-ri depicts everything that can happen to a person once he gets involved in dirty money. According to Park, the movie is actually about young people who dream of becoming rich, like Jo.

Jo, portrayed by Ryu, however, does not fare well in his new stock company, and he is at the brink of being fired because of his lack of expertise and talent in the field.

That’s when he meets a man nicknamed Beonhopyo (Yoo) - whose name literally translates to “number card” - who offers him a dangerous and illegal deal to become rich. This may also be Jo’s only chance to become rich because not anyone can work with him. Once the two meet, Jo is unable to back out from the deal.

Meanwhile, Han Ji-cheol (Jo), who works as a “hunting dog” of the Financial Supervisory Service, follows the two to figure out what they are hiding. This is when the conflict between the three begins.

After the film’s press premiere Wednesday in Dongdaemun, eastern Seoul, the actors and the director shared their thoughts on the film.

While many were concerned about how a film regarding stocks and finance would play with audiences, director Park said that she tried her best to make the world of finance approachable.

“The original novel that the movie is based on provides a kind explanation about finance and stocks, but since the movie has to portray the whole story in limited time, I tried to omit a lot of the explanations,” she said.

“Although I studied a lot about the field for the movie, I focused on and emphasized the fun parts [such as the character conflicts and actions] in the film.”

The main reason she chose to adapt the book into a film was because she could relate well to the main character, Jo.

“When I read the book, Jo was a very normal guy who later goes through a big change due to money. I thought that he was actually a pretty similar person to who I am in real life. If he were any more special, I would not have [adapted this novel into a movie].”

“I thought a lot about the meaning of money and felt a lot of emotions - from happiness to regret to nervousness,” he said.

“Then I came to a point where I thought that money is just something very difficult and it has a very different meaning to each and every person. I wanted to express that in the movie. The film made me realize what money really is. I hope I become someone who does not get controlled by money, but someone who can do the opposite.”

The movie is set to hit theaters on March 20.