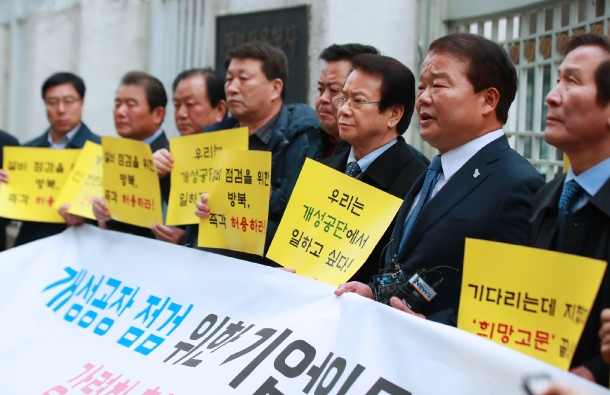 A group of South Korean owners of businesses at the Kaesong Industrial Complex hold a press conference Wednesday in front of the Central Government Complex, central Seoul, before submitting a request to the Unification Ministry for permission to visit their shuttered factories in North Korea. [YONHAP]

South Korean owners of businesses at the Kaesong Industrial Complex on Wednesday submitted a request to the Unification Ministry for permission to visit their shuttered factories in North Korea.

This is the eighth time they have applied since the inter-Korean economic zone was shut down by the previous Park Geun-hye administration in 2016.

A total of 179 executives and employees of the businesses put their names on the request, joined by supportive lawmakers from the ruling Democratic Party (DP) and three minor opposition parties.

“The government told us in our previous seven tries that they had to defer our requests because of a lack of sufficient consultations with the relevant countries and agencies,” said a spokesman of the group in a press conference at the ministry.

“But because we believe inter-Korean economic cooperation is a reciprocal project that can expedite denuclearization, we have made our eighth appeal.”

While the requested date of their visit is next Wednesday, the government has until the 22nd to respond according to regulation.

The Kaesong Industrial Complex, as well as the Mount Kumgang tour program, was the linchpin of inter-Korean cooperation initiated under the liberal administrations of Kim Dae-jung and Roh Moo-hyun.

Both projects, however, were shuttered under subsequent conservative governments, which had hard-line policies toward Pyongyang.

The liberal Moon Jae-in administration, however, ushered in a new wave of engagement with North Korea and has actively pursued the resumption of the twin projects in spite of the international economic sanctions placed on the North.

Though the much-anticipated second U.S.-North Korea summit in Hanoi, Vietnam, last week failed to yield a compromise that would green light economic projects like Kaesong, Seoul has shown an unwavering stance on its conciliatory policies toward the North.

At a seminar on the recent summit in Vietnam at the National Assembly on Tuesday, Unification Minister Cho Myoung-gyon said the government would continue to consult the United States with regard to whether there might be a way to pursue a “gradual approach to easing sanctions [on the North].”

Cho added that allowing businesses to “explore” the facilities at the complex could be something viable under the current sanctions’ framework, though his ministry has not yet talked to the United States about the matter.

“The Kaesong Industrial Complex and Mount Kumgang project must be the top priorities when we are to pursue inter-Korean economic cooperation in the future,” he said.

These supportive words from the minister encouraged business leaders to submit their visit request the very next day, as confirmed by the group’s head Shin Han-yong, who said Cho’s statement showed the government was more likely to approve their request than ever before.

“We will look into a variety of elements with regard to the request,” Unification Ministry spokesman Baik Tae-hyun said at a regular briefing Wednesday.

“We believe that activities that pertain to inspecting the facilities [at Kaesong] rather than operations are feasible under the current sanctions regime.”

With Lee Do-hoon, South Korea’s special representative for Korean Peninsula peace and security affairs, currently in Washington for talks in regards to last week’s summit, there is a possibility that he could raise the question of Kaesong with U.S. officials.