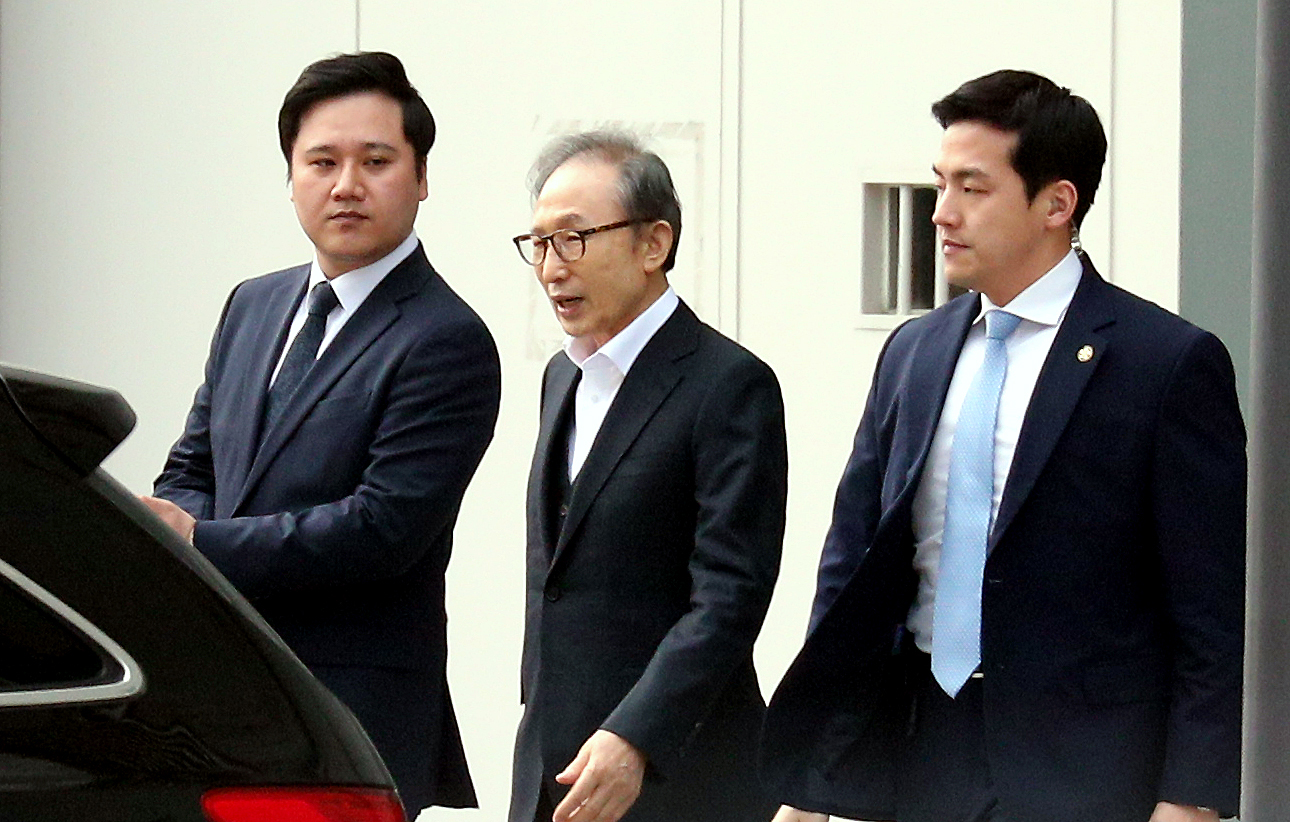 Former President Lee Myung-bak leaves Dongbu Detention Center on Wednesday after the Seoul High Court released him on bail. He was put under house confinement for the rest of his appeals trial. [NEWS 1]

Former President Lee Myung-bak was released on bail Wednesday after nearly a year of imprisonment before his trial on graft charges and after he was convicted late last year.

The Seoul High Court decided to release the 77-year-old former leader on bail and under house confinement to guarantee his defense rights during an appeal. Bail was set at 1 billion won ($885,740). Lee left the Dongbu Detention Center at 3:47 p.m.

The corporate CEO-turned-president, who governed South Korea from 2008 to 2013, was released after 349 days of detention on the conditions that visitors and communication access will be strictly restricted.

Lee was taken into custody by prosecutors on March 22, 2018 as a suspect in a criminal investigation. Lee was prosecuted on 16 graft, embezzlement and abuse of power charges in April 2018.

In October, the Seoul Central District Court found Lee guilty of seven of the charges including a conviction of colleting bribe from Samsung in return for issuing a presidential pardon to its Chairman Lee Kun-hee. He was sentenced to 15 years in prison and ordered to pay 13 billion won in a fine and another 8.2 billion won in restitution to the government.

After appealing the conviction, Lee applied for bail on Jan. 29. His lawyers argued there was a high possibility of their client’s sudden death in prison due to his advanced age and various illnesses.

They also said the judge in charge of the appellate trial was changed after a judicial reshuffle, and there wasn’t enough time for a hearing before the expiration of Lee’s detention on April 8, 2019.

The Seoul High Court conducted a reshuffle in February and two of the three judges in Lee’s trial, including the presiding justice, were replaced. Judge Jeong Jun-yeong was newly assigned to preside over Lee’s case on Feb. 14, 2019.

The prosecution argued that the change of the judge could not be a reason for bail being allowed, and that Lee’s health condition was not serious.

Judge Jeong sided with Lee on Monday. The court agreed with prosecutors that Lee’s health condition was not an issue since the detention center has adequate medical professionals and facilities. But Jeong said bail would be granted based on the idea that one is considered innocent untiul proven guilty.

“The bail system has its basis on the constitutional principle of presumption of innocence and the principle of holding a trial without physical detention,” Jeong said. “I have come to the decision to operate this bail system with strict fairness.”

“The court has no bias,” Jeong said. “The trial will also be operated impartially.”

He noted that Lee’s detention would expire in 43 days, which did not give the court enough time to hear all witnesses necessary before the deadline. “If Lee is released after the detention deadline, he will be free and his residency and contacts cannot be restricted,” Judge Jeong said. “But if bail is granted, he can be released conditionally and the detention warrant will remain effective. If he violates terms of bail, he can be detained again anytime.”

According to the court, Lee will be put under house detention and trips outside his residence will be restricted. If Lee needs medical treatment, he must receive court permission. Lee will also be restricted from meeting visitors or having communication with other people except for his family and lawyers.

Jeong also ordered Lee to submit a weekly report on his activities hour-by-hour. “Because you cannot leave your house without the court’s permission, it will be house confinement,” he said. “The accused must decide whether or not he will accept these terms.”

The court, then, took a 10-minute recess. Lee accepted the terms for his release after consulting his lawyers.

As the news was reported that Lee woul be released, supporters and media gathered outside his house in Nohyeon-dong, Gangnam District of Seoul. The Seoul Gangnam Police Precinct beefed up security in the afternoon by sending two additional companies to the area. Until now, one company – about 100 policemen – was assigned to patrol duty under the law governing the protection of a former president.

Lee was the fourth former president detained on corruption charges, and the first president to be released on bail. In 1997, former President Chun Doo Hwan was sentenced to life in prison and his successor Roh Tae-woo 17-years in prison terms for staging a military coup and creating slush funds. They were released in December of that year on presidential pardons.

Lee’s successor, Park Geun-hye, is still undergoing an appeals trial and is physical detained in the Seoul Detention Center.