Moon’s aides on talks with U.S. stay amid reshuffle

Moon’s aides on talks with U.S. stay amid reshuffle

Amid speculation that President Moon Jae-in will reshuffle his cabinet today, Blue House sources said Wednesday that Chung Eui-yong, director of the National Security Office, will definitely stay on, as will Moon’s closest aides responsible for negotiating with the United States on North Korea’s denuclearization.

This comes despite Seoul’s failure to successfully mediate between Washington and Pyongyang in their second bilateral summit last week, which collapsed without an agreement being reached. 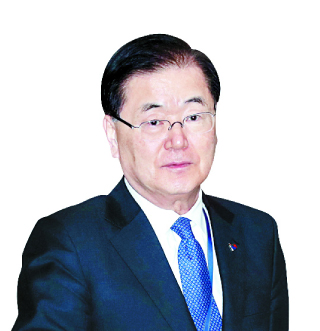 At a time when the fate of these discussions seems highly unpredictable, Moon thought it was too risky to let his U.S. negotiators go all at once, the source believes.

The local media thought Chung would soon be replaced largely because of his weakening clout in the Blue House and in talks with the United States.

Before the second North-U.S. summit, a Blue House official mentioned that Chung used to be in close contact with the White House when H.R. McMaster was the national security adviser to U.S. President Donald Trump.

Since then, Chung has mostly refrained from directly reaching out to the White House and adopted a new role of “overlooking affairs pertaining to the Korean Peninsula,” the Blue House official noted.

When Biegun revisited in October, he asked to meet Moon’s chief of staff, Im Jong-seok. Bolton was planning to meet Chung in Busan over the weekend right before the second U.S.-North summit was held, but that was abruptly canceled for an unknown reason.

The high-level Blue House official said Suh Hoon, director of the National Intelligence Service (NIS), South Korea’s equivalent to the Central Intelligence Agency, has been strongly considered to succeed Chung at the Blue House National Security Office, but that Moon isn’t following through with that plan yet because Suh had work left at the NIS.

That includes reforming the NIS, plus the fact that Suh has been responsible for behind-the-scenes communication with Washington on the North Korea issue.

Moon is expected to change several ministers today, with possible candidates being those for unification; culture, sports and tourism; land, infrastructure and transportation; oceans and fisheries; as well as SMEs and start-ups.