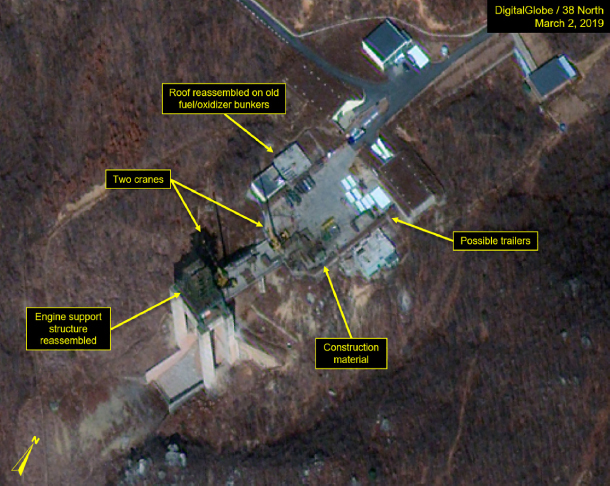 The Sohae Satellite Launching Station is seen with what researchers from Beyond Parallel, a CSIS project, describe as a vertical engine stand partially rebuilt with two construction cranes, several vehicles and supplies laying on the ground in a commercial satellite image taken over Tongchang-ri in North Korea on March 2 and released March 5. [YONHAP]

In a report to the National Assembly’s Intelligence Committee Tuesday, the NIS noted that North Korea started restoring structures on the rocket launch pad at its Tongchang-ri missile engine test site in Cholsan County, North Pyongan Province, also known as the Sohae Satellite Launching Station, ahead of the second North-U.S. summit held on Feb. 27 and 28.

Suh Hoon, director of the NIS, briefed the committee on the North Korea-U.S. summit in Hanoi, Vietnam, that concluded with no deal last week, and lawmakers who took part in the meeting relayed that the spy agency chief provided two possibilities for the restoration activities at Tongchang-ri.

“One is to show that they are giving up an immense facility in the case nuclear or missile-related facilities are exploded in front of U.S. inspectors,” Suh said to the committee. “Or in the case the summit does not go well, to resume its long-range missile [testing].”

Suh also said that the Yongbyon nuclear complex’s main 5-megawatt nuclear reactor has halted activity since the end of last year. Yongbyon, in addition to its main plutonium-producing reactor, is the site of a uranium enrichment facility that is likely in operation, according to international experts’ assessments.

“North Korea’s 5-megawatt nuclear reactor at Yongbyon has ceased operation since the end of last year and there is no indication of reprocessing activities,” Suh told lawmakers. There likewise was no activity at the Punggye-ri nuclear test side which was at least partially dismantled last May.

North Korea said it offered the dismantlement of its plutonium-producing reactor and uranium enrichment facility at the Yongbyon nuclear complex for some sanctions relief, namely United Nations Security Council resolution measures adopted in the past several years affecting the livelihood of its people.

Trump claimed the North had called for all sanctions to be lifted, which he said would require more than Yongbyon’s dismantlement.

This could involve undisclosed uranium enrichment facilities in the North. Washington has also been especially concerned about the North’s intercontinental ballistic missile (ICBM) program.

Some analysts pointed out that the resumed activity at Tongchang-ri, a site representative of the North’s ICBM capabilities, could indicate a deliberate move by Pyongyang to put pressure on Washington following the inconclusive summit.

In a New Year’s address earlier this year, Kim Jong-un said that if Washington persists in imposing sanctions, he “may be compelled to find a new way,” or a new path.

Following the first North-U.S. summit last June 12 in Singapore, North Korea began taking down its engine test site, launch pad and a rail-mounted building in Tongchang-ri. Last year, the North agreed to permanently dismantle the Tongchang-ri missile engine test site under the observation of outside experts and take additional measures depending on corresponding action by the United States.

North Korea halted its nuclear and missile testing in the spirit of diplomacy over the past 15 months, while the United States has scaled down or canceled large-scale military exercises with the South.

Suh conveyed to the Intelligence Committee that North Korea internally appears to be showing “considerable disappointment” in the results of the second Kim-Trump summit.

The Center for Strategic Studies’ Beyond Parallel project and the 38 North website reported Tuesday that activities were observed at the Tongchang-ri site, which has been dormant since August last year.

The CSIS found that based on commercial satellite imagery from March 2, just two days after the Hanoi summit, North Korea was seen to be pursuing a “rapid rebuilding of the long-range rocket site at Sohae.”

It said activity was spotted at the vertical engine test stand and the launch pad’s rail-mounted rocket transfer structure, and the environmental shelters on the usually closed umbilical tower have been opened to show the launch pad.

The report, written by Joseph Bermudez, a senior fellow for imagery analysis at CSIS, and Victor Cha, a former White House National Security Council official and Korea chair at CSIS, concluded that the current activity could be “deliberate and purposeful.”

They wrote that the renewed activity - coming just two days after the inconclusive Kim-Trump summit - “may indicate North Korean plans to demonstrate resolve in the face of U.S. rejection of North Korea’s demands at the summit to lift five UN Security Council sanctions enacted in 2016-2017.”

Analysts at 38 North likewise noted that Pyongyang started dismantling a rail-mounted transfer building on the launch pad along with the engine test stand last year. Yet based on satellite imagery, efforts to rebuild these structures started between Feb. 16 and March 2.

It added that the rail-mounted transfer building is being reassembled on the launch pad, and a new roof and walls have been erected at the building, and two cranes were also spotted.

An engine support structure appears to be reassembled at the engine test stand. Two cranes and construction materials were spotted, and new roofs have been installed on the fuel and oxidizer buildings.

On Monday, Yukiya Amano, the director-general of the International Atomic Energy Agency (IAEA), said that North Korea is still using the uranium-enrichment facility in Yongbyon.

This comes despite the fact that the 5-megawatt reactor at the Yongbyon complex appeared to have been shut down since early December, according to the agency’s latest Nuclear Safety Review.

In a statement to the IAEA Board of Governors in Vienna introducing its 2019 report, Amano said there were no reprocessing activities at Yongbyon’s radiochemical laboratory and that there was ongoing construction work at Yongbyon’s light water reactor.

But he said that in the IAEA’s assessment of the situation at Yongbyon as of the end of February, the agency “continued to observe indications of the ongoing use of the reported centrifuge enrichment facility.”

He continued, “However, without access, the agency cannot confirm the nature and purpose of these activities.

He added that the IAEA “stands ready to undertake verification and monitoring activities in the DPRK if a political agreement is reached among countries concerned.”

The Voice of America (VOA) on Tuesday quoted David Albright, president of the Institute for Science and International Security and a former UN nuclear weapons inspector, as saying that Trump likely walked away because the U.S. government knows that North Korea can produce nuclear weapons in locations other than Yongbyon.

Albright told the VOA that Yongbyon could produce enough plutonium and weapons-grade uranium to make up to three nuclear weapons in one year, and that North Korea “can have enough enrichment facilities outside Yongbyon to make that same number a year.”